First Line Fridays 25: Guibert of Nogent and an introduction to Medieval Literature

My first post in nearly 3 weeks. I have been remiss, again, and struggled to decide which book to share this week. I have already shared two of the books I am currently reading or have started. I was going to share a Historical Fiction novel I am going to start soon, but I just did not feel like doing that one.

So instead, I'm sharing a Kindle book of a rather unusual genre. It consists of two short books written by a 12th century French monk named Guibert of Nogent. One is a spiritual autobiography, and other a short treatise on relics: one of only a few books composed by a man largely forgotten until modern times.
The Publisher, Penguin books, have famously published many works of modern and historical literature, which I have started adding to my Kindle collection. 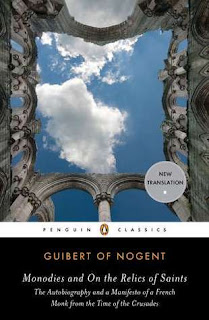 The first Western autobiography since Augustine's Confessions, the Monodies is set against the backdrop of the First Crusade and offers stunning insights into medieval society. As Guibert of Nogent intimately recounts his early years, monastic life, and the bloody uprising at Laon in 1112, we witness a world-and a mind-populated by royals, heretics, nuns, witches, and devils, and come to understand just how fervently he was preoccupied with sin, sexuality, the afterlife, and the dark arts.

Exotic, disquieting, and illuminating, the Monodies is a work in which the dreams, fears, and superstitions of one man illuminate the psychology of an entire people. It is joined in this volume by On the Relics of Saints, a theological manifesto that has never appeared in English until now.


I don't think the synopsis does full justice to the book, so my 'First Line' which is actually from page 3 will allow the author to speak for himself over a distance of nearly 800 years.

"When the world stood in ignorance of God, when it lived in shadows and the shadow of death, when it kept a communal silence as the night was driving its course, whose worthy action, whose summons could compel your all-powerful Word to come down from its royal throne?
Not even the negligence of all humanity could keep you from showing mercy, so it is no wonder if you are full of mercy for one individual, even a heinous sinner."

See now why I love Medieval Literature? Such profound thoughts from a misunderstood time.

Happy Friday and Happy reading until next week. Don't forget to click the meme to see what everyone else is reading, or share your own First Line.