In the Shadow of Croft Towers by Abigail Wilson 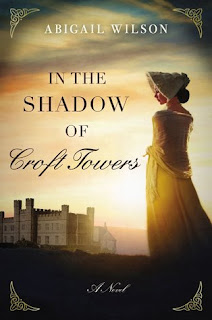 Croft Towers holds more than its share of secrets . . . and Sybil is determined to uncover them all.

When Sybil Delafield’s coach to Croft Towers was robbed by highwaymen, she should have realized that her new position as companion to old Mrs. Chalcroft would be no ordinary job. Upon Sybil’s arrival, Mrs. Chalcroft sneaks into her room in the dark of night, imploring her to relay messages to town that are to stay hidden from the rest of the family. Who exactly is she working for and what do the messages contain?

When fellow passengers of the robbed coach are later murdered, Sybil’s hunt for the truth takes on a new urgency. The only person she can rely on is Mr. Sinclair, Mrs. Chalcroft’s godson, but under all his charms he too leads a double life. Sybil must decide if he is the one honest voice she can trust, or if he is simply using her for his own advances.

With murderers, smugglers, and spies on the loose, nothing—and no one—in Regency England is what they claim. Can Sybil even trust what she knows about herself?

In the Shadow of Croft Towers in an excellent debut novel. There's a bit of an expectation these days for Regency novels not just to be 'bonnet dramas' so to speak, but to contain other elements such as intrigue, an espionage subplot or a mystery.

Wilson delivers a sterling Regency Romance with all of the above, as well as a tight plot and memorable characters.
Stories narrated in the First Person as this one is, don't always work well. Yet the heroine is able to guide the reader complex and dangerous adventures in Croft Towers, seeking to unravel the mysteries of her past, whilst running errands for her mistress with highwaymen, dragoons and a potential murderer at large.

So overall, this is an exciting, engaging and atmospheric Regency tale. There was not quite as much of a strong sense of place as in Julie Klassen's work, probably because that author visits many of the areas she writes about.
Wilson does however do well in recreating something of a sense of the period, the the environment the characters inhabit in a grand country house with many secrets during turbulent times.
It could be a little hard to keep up with all the characters and the mystery got a bit drawn out towards the end, but otherwise the writing was very good.

Sadly, there were some of the Americanisms common to stories like this, and the problem of distinguishing between England and Britain.
This was over a century after Acts of Union, which made England and Scotland into a United Kingdom, sharing a government and Monarch. It was Britain- including Scotland and Wales- that was at war with Napoleon, not 'England', and spying for the French would have been treason against Britain, not England.

Recommended for all lovers of historical fiction and Regencies, as well as fans of Julie Klassen and Sarah Ladd.

I requested this title from Booklook Bloggers. I was not required to write a positive review and all opinions expressed are my own.