Lord of Her Heart by Sherrinda Ketchersid

Lighthouse Publishing of the Carolinas
May 14th 2019, 244 Pages
Print and Ebook 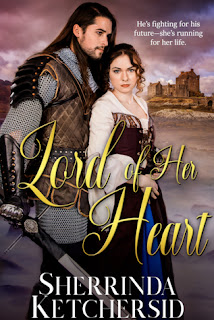 Lady Jocelyn Ashburne suspects something is amiss at her family’s castle because her father ceases to write to her. When she overhears a plot to force her into vows—either to the church or a husband—she disguises herself and flees the convent in desperation to discover the truth.

Malcolm Castillon of Berkham is determined to win the next tournament and be granted a manor of his own. After years of proving his worth on the jousting field, he yearns for a life of peace. Rescuing a scrawny lad who turns out to be a beautiful woman is not what he bargained for. Still, he cannot deny that she stirs his heart like no other, in spite of her conniving ways.

Chaos, deception, and treachery threaten their goals, but both are determined to succeed. Learning to trust each other might be the only way either of them survives.

I have a bit of an ambiguous relationship with Medieval Fiction. Some I love, sometimes I really can't stand it even if its set in my favourite period.

Thankfully, this new book fell into the former category. I ended up really liking it. It proved to be an excellent debut novel with an engaging plot, with a blend of romance, adventure and mystery. Sometimes its hard for newbie authors (or any authors) to blend together the various threads and numerous characters into a cohesive whole, but thus author does it very well with a story that's divided into certain parts starting out with more intense action, and settling into domestic scenes.

What's more, most of what happened was pretty credible. In some stories like this, a lot of suspension of disbelief is required, and even the romance was not too cliched or mushy for the most part. The combat and jousting scenes well also pretty well written. I also liked the way that Jocelyn was written as a strong woman: but what she did was plausible and within the bounds of the time.
Not like a modern feminist superhero: who is great at every form of combat without training and can take out whole armies or something or doesn't want to get married because its 'oppressive'.

There were only a few minor niggles. First off, whilst I generally like the cover: those costumes don't do it for me. The man's armour just looks off. Sorry.
My second point is not aimed at this book in particular, but just generally. Why is it assumed that normal way of using knives in the past was throwing them? Knives are not intended to be thrown: unless its part of a Circus act or something.
From what I've heard, throwing a knife is a really inefficient and inaccurate method of combat.
If someone wanted a projectile weapon, or something that could be used from a distance, there are much better options than knives. A bow, short spear, or even a slingshot would do the trick.

I'd certainly be willing to read future books by this author, and would happily recommend this one.

I received a promotional copy of this title from the publisher/author or their representatives. I was not required to write a positive review and all opinions expressed are my own.