Without a Trace by Mel Starr Review 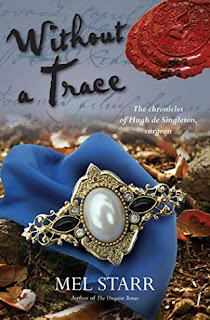 As the disappearance may have happened while the travellers were on Lord Gilbert's lands, his surgeon and bailiff, Hugh de Singleton, is assigned to discover what has happened to the lady. Has she been taken? Her has she fled her husband?

A few days later her husband receives a ransom demand, and Hugh is named to deliver the money. Why him? The ransom is paid, but the lady is not returned. Can Hugh help find her, or is it already too late?

An excellent latest installment in the continuing Hugh de Singleton series. This book focuses on the disappearance of a noblewoman rather than a murder, and I think there is more of an emphasis on procedure and investigation in this one.

The mystery has plenty of twists and turns, false starts and red herrings. Hugh- now Sir Hugh, follows a false trail and the wrong lead, which leads him to another potential mystery. In a sense, this proves he is only human and not everything is easy for him to solve.

As with the other novels in this series, there's usually an operation or two for Hugh to perform; this time he performs one on a horse as well. The details about Medieval life and society are also well done. In this case, they relate a lot to marriage and religion, as well as a moral dilemma towards the end.

There is a rather interesting scene in which Hugh sees some of his acquaintances using an early form a magnifying glass and decides he must have one (even though he does not struggle with his eyesight): the Medieval equivalent of needing the latest gadget or iPad.

Hugh's family also come into this one quite a lot, with his clever wife Kate, their children and her father. Readers should be warned, though, there are some tragic scenes that tug at the heart strings in this book as Hugh and his loved ones struggle with illness and a loss in the family.

It would probably have been possible for Hugh to solve this mystery quicker, and the book was rather more slow paced then some of the others, but it has everything that dedicated readers of this series have come to love. There's no political intrigue, sex or graphic violence, as you find in other mystery series, but some people appreciate that.
I thought it was a good installment, and look forward to the next one.

Although this book was released a week ago, I was sent a copy by the Publisher in August as I have reviewed titles for them in the past. I was not required to write a positive review and all opinions expressed are my own