Diamond in the Rough by Jen Turano Review 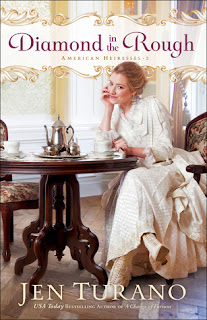 When Miss Poppy Garrison accepts her grandmother's offer of financial help for her family in exchange for Poppy joining the New York social season, she quickly realizes she is far less equipped to mingle with the New York Four Hundred than even she knew. As she becomes embroiled in one hilarious fiasco after another, becoming the diamond of the first water her grandmother longs her to be looks more impossible by the day.

Reginald Blackburn, second son of a duke, is in New York to help his cousin find an American heiress who can help save his family's estate. But when his very proper British manners lead Poppy's grandmother to request he teach etiquette to Poppy, he quickly finds himself in for much more than he bargained for.

And while they couldn't be more opposite, Reginald and Poppy just might find they have more to teach each other than they ever could have expected.

Diamond in the Rough was not the type of book I normally read. In fact, its my first Jen Turano book. It was great fun, sometimes laugh out loud fun, with the accident prone Poppy and her antics. She always seemed to be getting into trouble: and usually in a funny way. In an early scene she ends up with her top end hanging out of a window.

What with that and her unconventional family situation, she's far from a typical debutante, but she nevertheless catches the eye of Reginald Blackburn. In fact a couple of times he has to catch her physically. And rescue her on a couple of occasions. This is not done in a degrading way, it comes over as charming and its all part of the fiascos she gets into , often because she's trying to help someone herself.

At times, I must admit it was a little hard to keep track of all the characters, but overall I enjoyed this story as a light and fun read set in New York in the late 1860s.

The only thing I felt was a little implausible was that Poppy and even Reginald extreme surprise at the plight of the poor, and the implication they had basically never seen a poor person. There were charitable organization and projects to help the poor in Britain at this time and before, I think Reginald would not have been quite so naive.

Thanks to the Publisher via Netgalley for allowing me to read this book at my request. I was not required to write a positive review and all opinions expressed are my own.