A Pursuit of Home by Kristi Ann Hunter Review 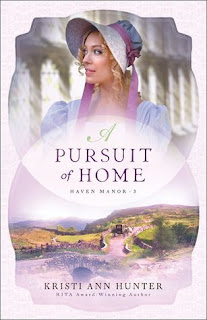 Jessamine Beauchene has spent most of her life in hiding and always on the move in an effort to leave her past far behind her. But when she learns the family she thought long dead just might be alive and in danger, she knows her secrets can only stay buried for so long.

Derek Thornbury loves the past, which has led him to become an expert in history and artifacts. He knows Jess has never liked him, but when she requests his help deciphering an old family diary, he can't resist the urge to help solve the puzzle.

As Jess and Derek race to find the hidden artifact before her family's enemies, they learn as much about each other as they do about the past. But can their search to set history right lead to a future together?

I think this novel might have been my favourite in the Haven Manor Trilogy. I think its because it takes the action outside the fictional Haven Manor, in an exciting adventure across Regency England, and beyond when Jess (Jessamine) the female protaganist has to face her colourful past.

Honestly, Jess was never a character I knew what to make of. I neither loved nor hated her. This is her story, and she emerges as a fascinating character who hides her vulnerability and grief about her past behind her tough and aloof personality.

Derek Thornbury is probably what today would be called a nerd. I man whose interest in a relatively obscure subject has become his life's great passion. Honestly, I just love nerdy characters, and Derek's passion for art and history are infectious.

Jess, initially only intends to use him for her own purposes, but there is a spark between them. They are thrown together on a cross country journey, which leads to witty repartee aplenty, as well as some interesting and mad escapades (including ingenious disguises). Since this is a romance, its inevitable the protagonists will fall in love, but I think this was well portrayed and developed.

Although a little complicated and perhaps over-ambitious in places, A Pursuit of Home was great fun overall. An atypical regency with some atypical characters. I did enjoy how different subjects and details were used in this story, from the landscape to details about technology, art and snippets of other languages. There are also hints of political intrigue and mystery. All of these apparently disparate threads are woven together well.

My only complaints were several Americanisms, and some modern intrusions in the characters speech. (The word 'okay' as I recall, is not recorded until the 1840s came from American slang- what on earth is a high born European woman doing using it 30 years earlier?). I did feel there was one aspect that was a little inconsistent in this story.

I don't remember Jess being especially religious in the previous books. She seemed indifferent, if not slightly hostile. Yet here she's a lot more open than she was before, even remembering previous, and not mentioned experiences.
I felt that contradicted some of what the reader had previously been told about her character, but its not a major issue.

I requested an ARC of this title for review. I was not required to write a positive one, and all opinions expressed are my own.