Cry of the Raven by Morgan L. Busse Review 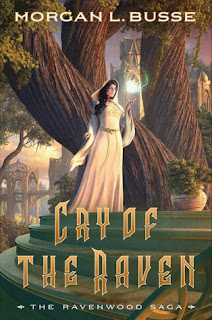 Lady Selene Ravenwood has come into her full power as a dreamwalker just as the war with the Dominia Empire begins. Working with the other Great Houses, Selene and Damien use their gifts to secure the borders and save those devastated by the war. But conflict, betrayal, and hatred begin to spread between the Great Houses, destroying their unity as the empire burns a path across their lands. At the same time, Damien Maris starts to lose his ability to raise the waters, leaving the lands vulnerable to the empire's attacks.

The only one who can unite the houses and restore her husband's power is Selene Ravenwood. But it will require that she open her heart to those who have hurt her and let go of her past, despite the one who hunts her and will do anything to stop her power.


Will Selene survive? Or is she destined to fall like the dreamwalkers before her?

Cry of the Raven was an amazing conclusion to the Ravenwood Saga. Admittedly, the story took a while to get off the ground (so to speak), but from about halfway through it got a lot better.

The characters prepare for their battle with the Dominia Empire, with whom Selene's mother is aligned. Most aspects of this fantasy story are tightly plotted and well-written, especially the part about Selene discovering how she can use her gifts to do good and to help others. Not simply to harm, as she's been taught.

There were only a few things which I felt weren't necessary. The wyverns (two legged dragons) for example. I understand they're based on the idea of a culture of dragon riders, but I'm not sure they were necessary to the story and they looked too much like aping of a certain popular Fantasy series from HBO. (Thankfully, there's considerably less sex in this.)
Seriously, though, the fantasy world that Busse has created is strong enough to stand my itself, without appendages from other stories.

It was interesting to see Selene and Damien's relationship develop, but also see them develop as characters individually. A lot of family secrets were revealed in this one, which could have destroyed them both. Selene's final confrontation with The Dark Lady revealed a lot of the allegorical aspects of the story, and the nature of 'the light' which many readers have probably already come to suspect. Its expected, but satisfying.
And the possibility of even Lady Rabbana finding redemption was a good touch, as well as the surprise which she is presented with in the final part.

Cry of the Raven was an excellent conclusion to the story. There were a few loose ends not totally tied up, but nothing essential to the story. I'd recommend this to all lovers of Epic Fantasy, but with the caveat that readers really out to start this series from the beginning with Mark of the Raven.

Thanks to the publisher for my ARC from Netgalley. I was not required to write a positive review and all opinions expressed are my own.