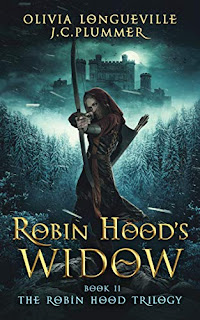 Meanwhile, the outlaws of Sherwood Forest rise again under a new leader—and she is unwavering in her pursuit of justice against the tyranny of Sheriff de Argentan. Marian endures the heartbreak of widowhood only to find strength and purpose as she leads a small band of devoted men in her quest for vengeance while she protects Robin’s legacy.Sir Guy of Gisborne, tormented by his conscience and enslaved by the sheriff, faces the wraith- like fury of the woman he once loved.

How do you find forgiveness when you have committed an unforgivable crime? He must attempt a daunting journey of redemption, while finding inspiration from an unexpected source.And through it all, Robin, Marian, and Guy are entangled in a web of treachery spun by the Kingof France and his sinister advisor, Montlhéry, as the plot to dismantle the Angevin Empire and take the throne of England from the Plantagenets boldly continues.


I had the pleasure of reading an ARC of this novel that the author sent me last year.  Robin Hood's Widow was an excellent continuation of the story that began in Robin Hood's Dawn. This series is an enjoyable ride through 12th century England and the Robin Hood legends, with some unique twists and turns. Faithful to the historical material and the the original legends, but breaks some new ground as well.

The story was exciting and heartfelt, but with some hilarious interludes.
The character development is good, and its also great to see some minor characters getting the limelight such as Edmund and Constance. I also enjoyed Guy of Gisborne's character arc. In the first book he wanted to be a good man, and in the second story, it seems there could really be hope for him though he's still under the shadow of the sheriff. But I really came to care for him in this one.

Marian is great too. Of course, as the title suggests she takes the leading role in this story and steps into the shoes of Robin Hood.
I like that she's not one of those unrealistic 'warrior women' with a chip on her shoulder, and something to prove, but she rather has a single minded devotion to the cause. Sometimes too single minded actually, though I think she comes to realize she was wrong at the end.
There's enough political intrigue but it doesn't overwhelm the thing, but I will be interesting to see the conclusion of it, especially the real truth about Argentin and Monthelry.

I would count this book as clean, and the characters attitude to religion is typical for the time period but not overly negative or anachronistic. There is some mild swear words (mostly from the bad characters) and references to sexual activity, but no actual sex scenes. It would be a shame to miss out on the story because of those though.

I'd certainly recommend it to anyone who likes Medieval Fiction and Robin Hood retellings. Below you can read and excerpt, and an interview with the authors!

9 April 1192, North of Poitiers, On the Banks of the Clain River

Bracing herself against a tree, Marian gasped for air, clutching her side as she struggled to catch her breath. She felt as though she had been running for hours.


“I think we lost that man who was following us,” Much shouted over the roar of the nearby river.


Allan, who was also winded from their dash along the riverbank, followed behind as they skirted the tree line of a dense forest. Bent over at the waist and panting, he asked, “Did you recognize him?”


Much peered over his shoulder again. “No, but he looked familiar.”


Finally able to speak, Marian interjected sharply, “All I care about is returning to England as soon as possible. The king commanded me to go to the court in Poitiers, and I did. I made no promises that I would stay there.”


“We are very far from home, with few coins…” Much faltered as Marian glared at him.


“You told me you knew the way,” she reminded him.


“I do,” declared Much. “I traveled between Aquitaine and the ports in Normandy many times with Lord Robin.”


She stared at him for a moment. The sound of Robin’s name struck her like a physical blow, as if Gisborne’s dagger were piercing her heart just as it had pierced Robin’s. Paralyzing anguish besieged her mind until Allan’s warm hand on her shoulder interrupted her descent into the black abyss of her grief.


“Much will guide us, and I will earn coins by performing in the towns along the way. It will take time, but we will be back in Nottinghamshire in a month or so.”


Marian gazed into Allan’s kind eyes and then Much’s troubled frown. They were both looking at her with such pity that she was overcome by an irrational fury—a toxic brew of bitterness that these men lived, while Robin lay buried in the Holy Land, crushing guilt that she hadn’t revealed her secret to Robin, and hatred for the men who had taken her husband from her: Guy of Gisborne, Sheriff de Argentan, and even King Richard. They all shared some blame in the tragedy of Robin’s death.


She recoiled from Allan’s attempt to comfort her. “We will do whatever is necessary to speed our journey,” she stipulated. “Allan will sing his ballads, and if we need to steal or beg, then we will do it. Nothing is more important than returning home and avenging…” she swallowed to maintain a steady voice, “Robin’s murder.”


The day was drawing to a close, so they made camp. Despite the chill of the spring night, it was too risky to build a fire, since Much was still worried about the man who had followed them when they slipped away from the palace.


Fortunately, Queen Eleanor had not been in Poitiers, so security around the keep had been lax. The dowager queen had traveled to England the previous month, determined to thwart Prince John’s scheme to join forces with King Philippe of France to undermine King Richard while he was away on the Crusade.


Marian had insisted on taking the first watch. She leaned against a tree at the edge of camp, hoping that she could detect the sound of approaching danger over the rustling of leaves and the whoosh of the river. At least the full moon brightened the forest, although the pale light left everything drained of color and vibrancy.


She willed herself to think of something besides Robin’s death. Instead, she reminisced about another full moon, now over three and a half years ago, when Robin had rescued her from the sheriff. They had pledged to marry and had later become one. It had been the true beginning of her marriage to Robin.


She desperately wanted to fill her mind with joyful memories like those of that fateful, glorious night. But again and again, the happy recollections would transform into the same horrific scene, and she would relive Robin’s death. The details were so vivid in her mind: kneeling in the gritty dirt, the soft texture of his hair against her cheek as she cradled him in her arms, and the sharp bristles of his short beard as they shared one last kiss. After his death, she had held his hand, clinging to its warmth and begging God to either restore his life or take hers as well.


At that moment, Marian had wanted nothing more than to join Robin in heaven. But with time to reflect, she realized that seeking death would not honor Robin or protect his legacy, and it could very well condemn her soul to eternal hellfire.


By the time she disembarked at Marseilles, she had dried her tears and resolved to resist the grief that relentlessly pulled her towards a chasm of black despair. She would not surrender her spirit to the melancholy allure of endless mourning.


Instead, she would take action. First, she would honor the blood oath she swore over Robin’s body by making Gisborne and Argentan suffer for their murderous deeds. Then she vowed to devote the rest of her life to ensuring that Robin’s legacy would endure and thrive. This would be her sacred mission as Robin Hood’s widow.
Buy the Book
Amazon.com:  https://bit.ly/RHWidow
Amazon.co.uk:  https://bit.ly/RHWidow-UK 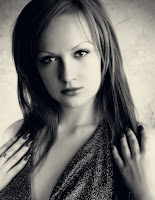 Olivia has always loved literature and fiction, and she is passionate about historical research, genealogy, and the arts.  She has several degrees in finance & general management from London Business School (LBS) and other universities.  At present, she helps her father run the family business.

During her first trip to France at the age of ten, Olivia had a life-changing epiphany when she visited the magnificent Château de Fontainebleau and toured its library.  This truly transformed her life as she realized her passion for books and writing, foreshadowing her future career as a writer.  In childhood, she began writing stories and poems in different languages.  Loving writing more than anything else in her life, Olivia has resolved to devote her life to creating historical fiction novels.  She has a special interest in the history of France and England.

Having met on the Internet, Olivia and J. C. Plummer, a writer and historian, decided to co-author The Robin Hood Trilogy.  Olivia and J. C. are retelling the Robin Hood story with an unusual and imaginative plot that is solidly grounded in 12th century history. The trilogy incorporates twists and turns which will captivate and entertain readers. 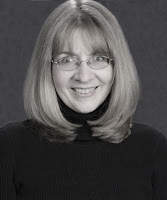 As an author and historian, J.C.’s goal is to provide thoughtful and entertaining storytelling that honors the past, is mindful of the present, and is optimistic for the future.