When the Roses Bloomed by Deborah Kinnard Review 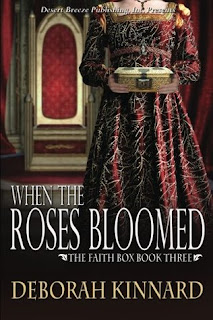 Margery and Robert are betrothed since childhood. Their fathers back different factions in the Wars of the Roses, but what is this to them? After the Battle of Bosworth, Robert and his father fight for the losing side. Margery's anxious father breaks the betrothal and the youngsters escape by night. Though they cannot save Robert's father, Margery insists they must hide Robert. With a plan to pass as servants, they seek safe haven in London.

A poor couple must cope with many distresses. They hover on the brink of survival until they find shelter with a sympathetic relative. Brother Thomas arranges them to go into the service of a very highborn lady. In Elizabeth of York's kindness they find safe haven.
But she is betrothed to the new king, Henry Tudor, whom no one knows. What will he do to the couple whose only crime was to back the wrong ruler?

When the Roses Bloomed was the last book in Deborah Kinnard's sadly now out of print Medieval series, The Faith Box.
The series spans nearly 600 years and the female characters are meant to be distant descendants of each other.

Anyway, this novel is set in the immediate aftermath of the battle of Bosworth in August 1485, in which two young people who's families were on different sides of the Wars of the Roses basically go on the run. Margery and Robert's relationship technically makes this a 'romance' but I think that's only insofar as its a central focus. There's a lot more going on.

This short novel gave you the "feel" for a country at war, and trying to come to terms with a new ruler, and there's a good sense of place and period. Better than a lot of books like this, I've got to say. The inclusion of certain historical figures towards the end was also a clever touch.

Sadly, this title is not out of print and I was given a copy by the author. Hopefully she will republish them some day.