Review of In Honor Bound by Deanna Julie Dodson 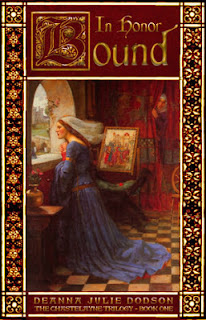 In Honor Bound- The Chastelayne Trilogy Book One
★★★★★

"His father will stop at nothing to keep the royal bloodline "pure" --even murder. But his sins have nearly destroyed Prince Philip and the future of his reign.

Forced into a political marriage, Philip tells his bride, "I will not lie to you, I will not be unfaithful to you, and I will not love you. My heart is pledged to another and I am not a man to break an oath."

His one true love is a lowly serving girl. When Philip refuses to set her aside in order to form a politically beneficial marriage, his father has the girl tried on false charges and executed. He then forces Philip to marry the beautiful and nobly born Lady Rosalynde. Devastated and embittered by his loss and his father's betrayal, Philip is determined to never love again . . . not his father, not his wife, not his God. Although Rosalynde adores him, he withholds his heart from her, refusing to let even death end his devotion to the love he lost. Despite his coldness towards her, Rosalynde is determined to love him and teach him to love her -- as determined as the God he has turned his back on. As civil war rages throughout the realm, Philip faces a greater struggle within himself. Will he open his heart to love again or let his pride destroy him and his kingdom?" 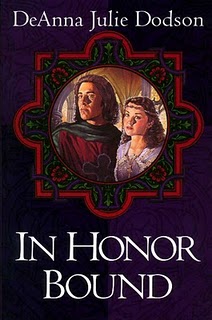 Opinion: Though I have known about the Chastelayne Trilogy for some time I only recently began reading it due to some (mostly unfounded) reservations. Quite simply it is one of the best Christian Medieval novels I have ever read, and the most Historically Accurate, or perhaps I should rather say Historically authentic, as the novel is not set in a real place/time.

One of the major issues that I have with many Historical novels is that the authors fails to appreciate the past on its own terms, and instead they impose anachronistic modern standards, values, attitudes, beliefs, concepts and often morality onto past eras, in which the all of these were actually very different from out own.


Deanna Dodson is one on the rare authors that largely does not do this, and in doing so displays an understanding and appreciation for alongside simple knowledge of the past. It is easy to cram a novel with specialist terms and historical details, but may no be so easy to write a story in which the characters are truly of the time in which the story is set.

The characters act within the constraints and expectations of their period and age, and the author tackles contentious subjects such as arranged marriage and gender roles  largely without being contemptuously dismissive  or judgmental of such practices and ideas.


Rosalynde the heroine is intelligent, spunky and knows own mind and is no shrinking violet or damsel in distress, but neither did the author feel the need to make her an over militant  stroppy smarty pants with a chip on her shoulder who has to prove she is just as good as the men by donning armour or using a sword like an expert soldier. Instead Rosalynde displays her strength in her own way, and within the social expectations and behavior of noble woman in this period.


Honour, duty and perceptions of public shame and reputation were acutely importing in the Medieval aristocratic society in which the characters live, and are cleverly worked into the novel as central features of the plot.
Deanna also does marvelous with the speech and language of the characters. In many Historical novels the characters speech is far too modern to be plausible, or is littered with out-of-place modern terms and phrases. It is not so here.


Of course the author does not have her characters speaking Middle English, or a language so archaic as to be incomprehensible. On the other hand it is historically plausible, includes actual period terms and phrases, and just sounds right.


Christianity/Morality: There is some 'romantic' content in this novel, but with only one or two notable exceptions  did not think there were any full on sex-scenes. The author stopped usually short of actually describing anything in graphic detail, and certainly does not go as far as other authors in this regard. However, readers may want to be aware of the one or two occasions in the novel in which the author does seem to come close to going a little too far, and take account of this.


I also the way that Miss Dodson's characters were not afraid tell the truth, or speak frankly about Christian concepts such as sin, salvation and the necessity of redemption. The honesty of Tom, younger brother of the Hero King Philip is particularly endearing, as he is never afraid to speak the truth and even rebuke his brother even doing so might be unwelcome or cause offence.

This said, he does suffer temptation and the hands of a peasant's daughter who gets him drunk and attempts to seduce him when he is hiding from his enemies. He kisses her, but comes to his senses before doing anything wrong.

Altogether and rare and excellent novel with maintains it's integrity as a  well-told and plausible story that is not 'preachy' or 'clichéd', but also does not compromise, conceal or 'water-down' the Christian content and ideas.

Only one passage was problematic in terms of religious content, this was one short scene in which Prince Philip knelt down in front of a statue of Jesus to pray, which could be objectionable to most Protestant Christians. Other than this, there were no real issues.

Historical: Even though the novel is not set in a real time or place,  a number of the characters and events have their basis in real Historical figures and events, for instance Prince Philip's character is undoubtedly based upon King Henry V (the fifth) of England, and his father's deposition of the King to take the throne for himself resembles the circumstances surrounding the real King Henry V's father obtaining the throne of England in 1399. The civil war in The Kingdom of  Lynaleigh that results from this act also mirrors the aftermath of this event in English history.

The only historical problems I spotted were some references to characters eating potatoes, which were not introduced to Britain until a century or so after the period when this story is set, and mention of cannons, and other such pierces of ammunition which were accurate and effective, when 15th century ammunition was notorious for being inaccurate, unreliable and often ineffective, even dangerous.

Finally, the description of the woman Phillip loves as a 'lowly serving girl' is not entirely accurate. The character in question was in fact a Lady in Waiting to the Queen, so she would have been of fairly high status, as least higher than the average 'serving girl'.