Review of 'Mark of the Cross' by Judith Pella 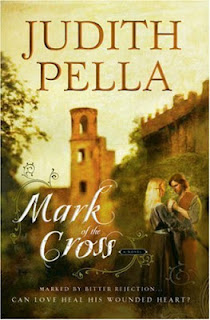 "Philip, the illegitimate son of a powerful English lord, is taken in by his father but given no claim to an inheritance. Gareth, the legitimate son, is cruel and abusive to Philip. When their father dies of a heart attack, Gareth frames Philip for murder, and on the eve of his expected execution, Philip escapes to begin life as a fugitive and mercenary. His longtime love, Beatrice, awaits him, fervently hoping circumstances will change. But when she finds herself at the mercy of Gareth, who will stop at nothing to acquire her and her lands, she strikes a most grievous bargain. Bitter and angry at the news, Philip devises a dangerous plan for vengeance. But love and hatred both have consequences, and he must face the truth that heaven will not be ignored."


Opinion: As much as the novel tries to make the relationship between the protagonists Philip and Beatrice into an epic, and touching love story, to me, it just was not, especially in the early part of the novel . The heroine Beatrice came across, at least at first as a shallow, spoiled, vain, self-centred shrewish brat.

If her `love' for Philip was so heartfelt, deep and genuine , why could she not show him  enough respect to accept that he simply did not want to have sex with her, and kept throwing herself at him regardless?
Thus her selfish desire  to get what she wanted and have her own way with Philip, regardless of his own wishes and desires in this regard did not seem very much like 'true love' at all.Instead it seemed more like the amorous fancy of a spoiled immature girl desperate to lose her virginity to a man she had just clapped eyes on, and who seemed to have hardly any self-control. Such hardly seemed like the of a romance that could last years even when the partners were separated.

Yet Beatrice's relationship with Phillip is supposed to form the basis of the entire novel, which does not seem to bode well when it appears so superficial at the beginning.
Even when she makes a commitment to chastity before marriage after Philip's horrid half brother Gareth tries get his wicked way with her, she quickly does a complete U-Turn and a few chapters later forgets her new found commitment to abstinence, and tries to have her way with Phillip once again before he leaves England in exile. Are we really supposed to believe that such a capricious character is capable of keeping any kind of vow?

Philip was a more well-rounded character, and the reasons for his anger, bitterness and sense of rejection seemed genuine enough. Yet his constant tendency to blame every ill-circumstance that befell him on God, rather than realizing it might be due to his own shortcomings or the actions of humans did not seem plausible, and just seemed to be a convenient excuse for Philip's religious skepticism.

Christianity/Morality: Readers should be warned of the sexual content of this novel, even though Philip and Beatrice never go all the way, and nothing is described in graphic  detail, this book is not one for younger readers, because of these and other aspects.
There is also some violence, of which some can be a little graphic, and really Philips reluctance to kill his brother (or allow anyone else to do it), does not ring true, as his death was the only thing which could bring about his and Beatrice's happy ending.
Considering that she is meant to be a 'Christian' (though not really so at the beginning of the novel) Beatrice seems surprisingly lacking in moral scruples or self control,   and was more than willing to do things she knew to be wrong where Phillip was concerned. Though he was weaker in faith than her, he seemed more reluctant to engage in sexual immorality,  (partly due to the circumstances of his own birth) and seemed to have more of a conscience.
Beatrice's `repentance' for her adultery and incest with Philip towards the end of the novel seemed contrived and fake. All of a sudden we are told that she felt`repentant' when all she seemed to be sorry about was losing Philip and her lot in life, and claimed the product of her adultery was a `gift from God'.

History- There were a number of historical issues in this novel some of which are highlighted below.

There seems to be a clear attempt to draw parallels between the `Baron's War' of Simon de Montfort, and his noble sympathizers against King Henry III  and the American Revolutionary War with lots of talk of people fighting for their `freedom' `rights' and `liberty' against a `tyrannical' ruler to force him to adhere to the  Magna Carta which is presenting as something akin to the `Bill of Rights'.
Those who supported the King are described as `royalists' which is something of a misnomer as it seems to imply that those who were on the opposing side wanted to dispense with the monarchy altogether. Yet I found it very hard to believe that Medieval British people could even conceive of their country not having a King.
In another place Beatrice demonstrates her staggeringly advanced knowledge of microbiology and bacterial infection by expecting physicians to use Modern medical techniques that could only arise from this. Yet a few passages later, she is back to binding up wounds with dirty rags or cloths, which amazingly did not become infected.

The ending seemed very neatly 'wrapped up' which I suppose was necessary to make it happy, and satisfying after all Philip and Beatrice had been through. Yet it was also one of the most historically implausible aspects of the work, as it seems rather unlikely that Phillip would have even been legally allowed the woman who had been his half brother's wife, hence his own sister in law, without a dispensation from the Pope.
Also, I very much doubt Beatrice's reputation would have survived intact when it was revealed that she had gotten pregnant by her husband's half brother. In this sense, the way things turned out just seemed too easy and convenient.