Review of Gallimore by Michelle Griep 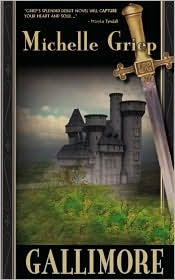 "Jessica Neale's faith is lost the day of her husband's death, and with it, her belief in love. In a journey to find peace, she encounters a gentle, green-eyed stranger who leads her to the ruins of the medieval castle, Gallimore. On his way to battle, Colwyn Haukswyrth, knight of Gallimore, comes face to face with a storm the likes of which he's never seen, and a woman in the midst of it who claims to live centuries in the future.

The Lady Jessica of Neale is an irksome, provoking bit of woman to be sure. And she's about to turn his beliefs on end. The product of a family rooted in pain and evil, Colwyn has focused on naught but himself-until Jessica. To a mysterious prophecy stitched on a tapestry, through the invasion of Gallimore itself, Colwyn and Jessica are bound together by a lesson in forgiveness and love-a bond that might be strong enough to survive the grave."

Gallimore was a clever time travel novel with some interesting elements worked into the story which provided and interesting ‘twist’ on the genre. This said, the historical setting did not always seem to fit the story comfortably, and whilst I understand that a story based on time travel requires a real time period to travel back to, I almost think the story might have worked better if set in a fictional country. I did have a few issues with the historical content- one was the way in which the medieval aristocratic characters were depicted as uncouth and ill mannered.

Such depictions seemed to be the result of clichés more than anything else, as people as the nobility of this period were actually very strict on manners and etiquette. Sometimes too the violence and brutality of the seemed seemed a little exaggerated and overdone- almost worse than the time period actually was.
Another issue was the characters constantly traveling at night, in a time when such was dangerous and most people would have avoided it. Despite warnings to this effect, and being attacked because of it, the characters do persist in their solitary nocturnal journeying.
Finally, it did seem a little implausible that the King (in this case Edward II) could have got away with acting in the way he is depicted to have done towards the nobility in this story. I somehow doubt they would have stood by and allowed him to decimate their lands and ‘eliminate’ them without fighting back. King he might have been, but he could not do whatever he wanted.

Jessica’s character worked well as a person outside her own time, whose sensibilities, beliefs and attitudes conflicted with the social norms of a different period. This could land her in trouble, or result in some rather humorous situations. She was however no shrinking violent, and sufficiently sassy and feisty to please most, without being too militant.
The hero Colwyn was one of my favourite characters, a typical fourteenth century knight who is macho and but has a heart. I personally found his gritty pragmatism quite endearing, and his inner conflict really seemed to add something to his character.

The spiritual journeys of both the lead characters really seemed to be well done, especially with Colwyn, as although he respected God, his belief that he could not be forgiven as he had done too many bad things is something that people could identify with. Though he does find peace and forgiveness for his sins, Christ was not mentioned at all in this passage, as would have been fitting. This did bother me perhaps did suggest some measure of 'dumbing down' of the Christian content.

Content wise, this could be counted as a ‘clean romance’ though the kissing and embracing does come close to getting a bit much at times. Readers may wish to note that this story is dark and gritty, sometimes very dark as the villain Tarne practices Black Magic and although he occult practice is always shown to be evil and it's source demonic the descriptions of it might be off-putting for some. This said, none of the good characters never use or engage in it, it is shown that the power of God and Christ working through Jessica and Cole defeats the evil power of Tarne.

There is also quite a lot of violence it is not described graphically for the most part, not does it seem to be glorified. Yet even though some of the violence may be in keeping with the violent nature of the period, but at times it just seemed a little exaggerated or overdone, even taking account of the setting.

Altogether, Gallimore is a great historical time travel romance, with good characters and a compelling storyline. As with some other reviewers I found the lack of resolution at the end rather disappointing, as I would like to have known what actually happened to Colwyn and some of the other characters, and what finally conspired between him and the villain. Taking account of the content outlined above, I would say that this novel may be unsuitable for younger readers in places, and is not a ‘light’ read. If you do choose it however, it is well worth a read.