Review of 'By Love Redeemed' by Deanna Julie Dodson 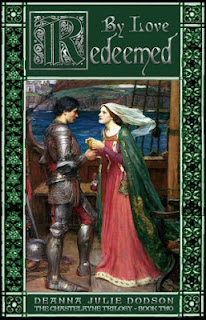 "Complete strangers on their wedding day and separated by war since their honeymoon, can they find true love together?

Even though their time together has been short, Prince Tom is eager for his bride's return. Though his love for her has grown, Elizabeth makes it clear that she considers him a stranger, not to be trusted. Not to be loved.
Certain the lavish love he claims to have for her cannot be genuine, Elizabeth turns to a deceitful friend who feeds her doubts and insecurities, poisoning her mind against her young husband. Just as Tom's patient tenderness begins to soften her heart, he is left with a heavier burden. His brother the king receives news that threatens the stability of the kingdom and his marriage. Forced to go in secret to find the truth behind it, he leaves Tom to deal with the undercurrent of treason and treachery that lies beneath the deceptive quiet of the court. Will Tom be able to hold the kingdom together and win his wife's heart? Or will she let a seductive stranger lead her away from his unconditional love?"

Opinion: I loved 'In Honor Bound' and really liked this novel, the second in Miss Dodson's 'Chastelayne Trilogy', though I confess I did not love it as much as the first. As before the novel was quite historically authentic and the author has appears to have made some effort to make the language of the characters authentic too.

Tom the brother of Philip is the main protagonist in this story, I really liked him in the prequel, and it is nice to see him and other characters again developing and having to face new challenges.


Tom was hurt and mistreated by his wife Elisabeth, who repaid his love and affection by slapping him in the face, both literally and proverbially, and so it could be hard not to be annoyed by her shrewishness, and over or dislike her for the possessive jealousy and lack of trust which caused her to condemn Tom as a lecher if he so much as talked to another woman. Yet for all this she was willing to believe that she was wrong, even though she was too strong-willed to admit it, and all her disgraceful treatment of Tom was essential to the storyline.

I look forward to the third and final novel, but the feeling is bittersweet knowing that it will be the last in the trilogy. This and the first novel I count amongst my favorite Christian Fiction Reads this year.

Christianity/Morality: There was much more emphasis on Romantic rather than Historical content in this novel than the first, which was one of the reasons I did not always enjoy this novel quite so much as the prequel,  but this content worked well with the storyline and was presented (usually) tastefully and sensitively.
Personally, I did not feel that the 'sexual' or rather Romantic content was ever too graphic or that the author ever actually went too far and described sexual acts in detail, she always stops short of doing this and more seems to know when to stop so as not to stray beyond the bounds of taste and decency.

I also feel that there is more of a commitment to and emphasis upon truth and truthfulness in this series than in others. The characters are flawed, but they are honest about what is right and wrong, and about their own behaviour and others.
Elisabeth for instance willingly admits that she was responsible for her adulterous liaison any only engaged in it to ‘get her own back’ on Tom when she wrongfully believed he had been unfaithful, whereas other authors would have tried to lay the responsibility entirely upon Tom’s shoulders.

History: Again, the attitudes and values of the characters reflected those which would have liwkly have been common in a Late Medieval society.
The author  also seems to be familiar with the legal and political conventions of 15th century Europe and England, and details of these really add a more realistic edge to the story.
There were a couple of scenes which did seem a little implausible in their details such as Tom engaging in single combat with an expert swordsman yet not wearing any armour, or the sheer absurdity of King going off to deal with potentially a potentially dangerous situation without any reinforcements or an armed escort.