Review of 'Circle of Honor' by Carol Umberger 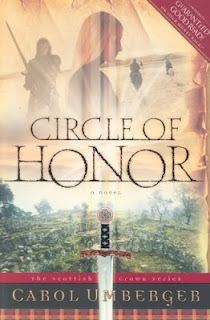 Opinion: As  romance novels go, the titles in this series are passable, and on some superficial level even enjoyable, but I would say not nearly as excellent as some fans have claimed.
It seemed to me that they were all rather followed more or less the same formula that a hurting man/woman with issues falls for good-looking girl/guy (usually also with issues) who they can’t stand at first, and end up falling hopelessly in love.

In this novel the ‘hurting woman’ is Gwyneth Comyn, a relative of the John Comyn was murdered by none other than Robert Bruce in a church (the author follows the official line that Comyn was an evil traitor who betrayed and provoked Bruce of course).
She is separated from her family and her betrothed after the murder, and forced to live incognito, gets raped by the bad guy and is forced into marriage to the hero Adam Mackintosh who just happens to be a close personal friend of Robert Bruce and of course does not know the true identity of his bride.

To cut a long story short, Adam and Gywneth must overcome lots of obstacles and difficulties before the course of their love can run smoothly.
This formulaic nature of the storyline could make it appear repetitive and predictable, the villain seemed rather  one-dimensional, and had to go around doing really bad things like rape, and murder to emphasise how bad he was- yet their actions very often have little or no motivation.

The depictions of English and Scottish respectively seem to be based on stereotypes. Hence The English characters all speak with ridiculous accents (like in Braveheart).
Many of the Scottish men wear kilts (several centuries too early), speak with exaggerated  accents, but the French that was widely spoken by both the English and Scottish aristocracy of the period is almost entirely absent.

History: One of the main issues I had with the historical content of this series was strongly biased and slanted version of history it seemed to present.
Obviously, the English are the bad guys, so are presented as evil tyrannical imperialists oppressing the poor downtrodden Scots.
This is turn results in what appears to be a rather 'sugar coated' representation of Robert Bruce and the Scots which does not take account of the selfish motivations some historical figures may have had.
Yes, some of the bad things Bruce did are mentioned, but it seemed that characters like Gwyneth were  too easily won ever to Bruce's side with talk of his championing freedom.
Would a person who had had most of their family killed, driven into exile or dispossessed have really been so readily persuaded to go over to the side of the person responsible? I hardly think so.

Finally, the conflict in Scotland seems to have been very much oversimplified to a simple matter of English versus Scottish, so that the former is blamed for almost everything- largely ignoring such facts as the civil war raging in Scotland which was not caused by the English at all.