Review of 'Return to Alastair' by L.A Kelly

Return to Alastair- Book 2 of the Tahn Dorn Trilogy 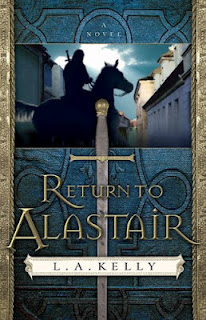 "Once a feared mercenary, Tahn Dorn has abandoned his old ways and is building a new life. But his heart is still heavy. Haunted by confusing dreams and uncertain of his growing attraction to Netta Trilett, Tahn knows he must come to terms with his past before he can look to the future. And that means returning to his birthplace of Alastair--a journey he knows will not be easy. And so begins Tahn's search for truth, where he encounters old adversaries, deadly threats, a long-lost sister, and the distrust of an entire town. Return to Alastair is the continuing tale of an unlikely hero who must learn the power of forgiving others--and forgiving himself--in order to accept the love of a good lady"

Some of the new characters, like Tahn’s sister long-lost sister Tiarra are interesting, yet the revelation that demise of his parents came at the hands of (surprise surprise) the dastardly Baron Trent was almost too easy to guess and just seemed unoriginal. Do the Trents really have to be behind everything?

The villain himself is almost laughable in terms of his bungling incompetence, and is so one dimensional he could be made of cardboard. It also seemed to me that he appeared to be based upon the stereotypical depiction of an 'English' nobleman, with his high register language and class-snobbery. Or perhaps more correctly the depiction of him is based what an American who had never met or seen an British person thought they were like- based on what they had seen in movies.

Christianity/Morality: There is no sex, and very little objectionable content in this novel, and the only one or two swear words used naturally by the villain.
This is on the whole a great Christian story, which presents the concepts of forgiveness, of oneself as well as others, redemption, love and trust in God well, and the author made them work well as central theme throughout the story. Furthermore, the Christian content did not seem to have not ‘diluted’ as it is in some novels.

Historical: The biggest problem with this novel for me, pedantic history student that I am, was the historical setting. It is supposed to be ‘Medieval’ but just does not ring true. The characters use swords, and some live in castles, but this really just seems superficial- like something out of a Disney fairytale. Their speech is that of modern Americans, not Europeans let alone Medieval ones, and is littered with modern slang phrases.

The repeated use of the inaccurate and grammatically questionable word 'Baronship' to describe the lands and titles of a Baron instead of the correct term 'Barony' made me feel like throwing the book against the wall (had I not been reading the electronic edition) and really just suggested the author had done little if any research into the Medieval period, and had simply guessed at any unfamiliar terms rather than bothering to look them up.

In another place, the novel seems to reflect a typically American view of the aristocracy in which the heroine dismisses all nobles as lazy, spoiled and having never faced hardship or done a day's work in their lives. Anyone who had truly studied the Medieval aristocracy would realise this was not the case, and that Medieval aristocrats spent much of their time fighting, or were the ruling classes  and that this was their 'work'.

I rather think this novel would have been better off set in the modern period, or post 17th century America. It is worth a read as a Christian novel, but may not entirely satisfy the historical tastes of those who prefer their medieval novels more accurate and authentic.