Review of 'The Laughing Side of the World' by Robin Hardy 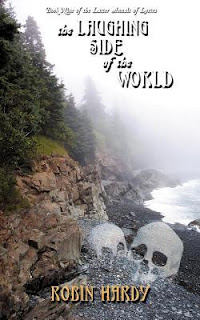 The Laughing Side of the World: Book Nine of the Latter Annals of Lystra

From the back cover: "Having abdicated the throne of Lystra in favor of his adopted son, Henry, Ares travels to the monastery/leprosarium he had established, the Sanctum. Ares has heard disturbing reports that the Master of the Sanctum has converted it to his own private domain. Not to be left behind, Nicole follows. With the cooperation of Nicole and the Second Oswald, Ares acts as poltergeist to the Master's rule at the Sanctum. But when Henry's sister Ren e misplaces some property, she goes to the Sanctum to recover it-and there discovers who is fomenting rebellion against the young Surchatain.The Laughing Side of the World is Book Nine, the final book of The Latter Annals of Lystra. It includes eight pages of "A Lystra Retrospective" with images not seen anywhere else."

As with the other novels several of the character go under assumed identities and have to use cunning or deception to outwit their enemies, or in Renee’s case using usual device of sex to get information out of them. The villain, an evil and corrupt monk named Manworren was at least an interesting character, though perhaps a little unoriginal and as with most of the other baddies before in the series, seemingly not very bright.

As another reviewer pointed out, the rebellion which is the central focus of the plot seems to have come out of nowhere, and to me it seemed that the disaffection of most the nobles involved in was baseless. Indeed, most of them were very minor characters some of whom seemed to be new, and others who are scarcely mentioned in previous novels. So that it almost gets to the point that a reader may be left scratching their head and asking ‘okay who is this person again, and why are they out to kill Henry and Ares exactly?’

Also, the execution of the plot was almost so simplistic as to be absurd. It involved a few armed lords attempting to kill Henry at the dinner table in front of everyone. After all the preceding scenes in which the terrible danger to the ruler Henry and others had been emphasised, and with all the and supposedly meticulous planning, one would think that the traitors would have done something less obvious then the above, and displayed a little more initiative or intelligence.

Christianity/Morality: On a personal note, I was not convinced by one other reviewer’s (Deanna Julie Dodson whose novels I love, and I respect) claims that the character of Renee had begun to ‘change her ways’. She was as arrogant, self-absorbed conceited as ever. As usual she was lording it over most of the other characters including those of higher status then her, abusing and humiliating those around her for no good reason, and expecting everyone to do what she wanted. I was amused and rather elated when her patsy Bonnie (the sister of the ruler’s wife) actually showed some assertiveness and would not just let Renee tell her what to do. However, as was typical with such aberrations, she repented of having been so ‘rude’ soon afterwards, and happily returned to her usual status of minion.

Renee was also as much of a shameless slut as ever (in spite of some laughable talk about her imaginary ‘honor’) using the monastery by seducing Manworren shortly after her arrival. In a farily obvious, though predictable attempt to exonerate her of this adultery it is made out that she was acting in the greater good of her country, by helping Nicole and Ares to get information about a plot out of him and claiming that this act was performed 'at great cost to herself'.
This 'cost' (perhaps designed to illicit the reader's sympathy) was Manworren trying to violently force himself upon her when she attempted to leave the room in the middle of the sexual act after promising to ‘give herself to him fully’.
Given this, and her previous use of sex to get what she wanted out of men such an outcome was hardly surprising, and indeed one could almost say it was  an inevitable consequence her amoral promiscuity.
Also, her beauty and ‘feminine charms’ constantly having a debilitating effect upon all the men around her is becoming rather stretched, tiresome and predictable. Are we really meant to believe that no man on earth has the ability to resist the advances of an aging seductress losing her beauty?

Historical: The one positive I might mention is that this novel did not seem quite so anachronistic and historically far-fetched as the others and more on line with the medieval setting. This said, the inclusion of numerous obscure terms for food could give the impression that the author was ‘showing off’ to a certain extent.

Finally, I found the depiction of Historians in the final chapter not only absurd, but personally offensive. In one place, two students visiting the ruins of the Abbey with a Professor mention how one of their other professor’s said the Bible was written by Baptists in the 18th century, when no real Historian on earth would make such a ludicrous claim. The main Professor also makes unfounded and far-fetched claims, and it really seemed as though the author was deliberately seeking to depict historians as ignorant or foolish people yet arrogant people who present an inaccurate version of the past to others, yet present it as the ‘right’ one.

Even more absurd though, was one fan’s dismissal of the fictional Professor Baxter’s claim that Ares and Nicole lived in the 14th century (a claim fully supported by the historical details within the novels themselves) and assertion that the series was actually set in the Ninth century on the basis of an note in the appendix about a ninth century Hungarian King who joined a monastery, who provided the basis for some fictional ruler mentioned by the characters. Yet even this ruler is implied to have lived a long time ago by the characters, so the whole basis for such historical claims is flimsy at best.

Yet this episode serves as a good example of the potential pitfalls of basing one’s knowledge of history on fiction. For all the supposed arrogance and stupidity of historian which fans rally against, their belief that they ‘know better’ because they take their knowledge from the novels carries absurdity to new heights.