Review of 'The Scarlet Trefoil' by L.A Kelly

The Scarlet Trefoil: Book Three of the Tahn Dorn Trilogy ★★★☆☆ 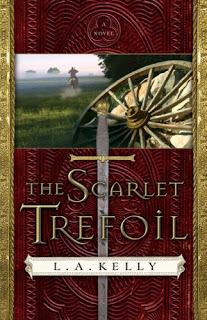 
Opinion: As with the last novel, this one left me with somewhat mixed feelings, overall, I would say I enjoyed it a little better than the last one, but it had many of the same shortcomings as its predecessor. The first half of the novel seemed to me repetitive and rather slow and tedious. Netta gets kidnapped, and Tahn gets captured by the bad guys and beaten up again. Even these events seemed predictable, or at least not unlikely, and it required almost no imagination to guess who was behind it all- naturally the villain from the last novel Lionell Trent, with his usual plan to eliminate Tahn with the help of the bandits from the last book.  He doesn't seem to have much imagination either...

Parts of the second half I found more enjoyable, partly because they seemed more historically plausible or simply well written and original then other parts of the book.

Some of the characters start to come into their own a little more, like Benn Trilett who is not such a wet blanket. The conclusion to Than and Netta’s story was satisfying, if a little predictable, and one could be forgiven for thinking that a little too much adversity then was plausible was thrown at them before they got their happy ending.

Christianity/Morality: There is hardly any objectionable content in this novel, apart from some violence against Tahn and Netta which does arguably become a little tiresome by its overuse. ‘The Scarlet Trefoil is a good Christian novel which builds upon many of the same themes of the two prequels, such as the efficacy of prayer, and the faithfulness of God.
The only thing which I found a little strange was the appearance of angels at Tahn’s side, who are initially there to protect him from the baddies.
I know that ministering angels are mentioned in scripture, and I do believe in their existence, but the manner with which Tahn almost causally converses with the angel just seemed to me a little bit –for lack of a better word- weird.

History: As with the other novels, a lot of the characters were so ‘Americanised’ in terms their speech and attitudes- and even some of the names that they could have stepped off the set of a Western. I personally find that content such as this makes it difficult to take the characters seriously as medieval people, and it seems as though the story is populated mainly by sword wielding cowboys.

Another thing which bothered me was the depiction of aristocratic characters- which seemed to reflect American prejudices and stereotypes more than fact. Apparently almost every person of noble blood (except the practically perfect in every way Triletts) was supposed to be lazy and pampered- unlike real medieval aristocrats whose often were the fighting classes.
Then there was the way that any customary practice or tradition which did not make sense to the characters was regarded as 'stupid' or unnecessary.
Personally, I think it takes more than sword wielding men on horses and the , lords and ladies, and an odd castle or two to make an authentic Medieval tale, and that this trilogy really would have been better set in another time period.