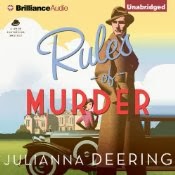 Having read two of the author's previous titles (part of a Medieval trilogy) , and as a fan of Marple, Poirot and other classic mysteries I was excited about Rules of Murder the first of a new series by the author. In some ways it didn’t disappoint, with the 1930s setting, details and the aristocratic protagonist reminiscent of the above. Simon Vance, narrator of the audiobook version of this title which I listened did well as (An)drew Fathering, although his American accent, and other regional linguistic variations were not always so convincing. That said, Vance has narrated a number of other titles, so his style of reading and voice was not boring or  monotonous and good enough to keep the listener engaged for eight and a half hours.

Drew and Madeleine’s characters were interesting enough, and the notion of them using and works of a 30s mystery writer to guide them in their amateur sleuthing. Yet those of us not familiar with the works of ‘Father Knox’ might find these references obscure. Books set in Britain by American authors can sometimes have their pitfalls, such as stereotyping, and a lack of understanding for cultural or linguistic differences. I think the author pulled it off well for the most part, with the exception perhaps of some of the characters like Inspector Birdsong, who seemed like a stereotypical Londoner (at least his accent in the audiobook made him seem like this) reminiscent of Inspector Japp of Poirot, and only a few notable Americanisms in the character’s speech.

The main issue I had with this story was its complexity. I understand that in a good whodunit it should not be easy to guess the perpetrator, but in this there seemed perhaps to be too many false starts, twists and turns, possible murderers, suspects or red herrings, and sometimes the story just seemed a little hard to follow. Perhaps this was due to the fact that it took me some time to listen to the story, and there was sometimes a gap of several days before resuming it, but though I grasped the basic thread of the story it could seem a little hard to keep up.

Also the later crimes themselves perhaps seemed a little unnecessary, and when the story was concluded there was a particularly gruesome detail which I found off-putting. The Christian content was not always prominent, and consisted mostly of Madeleine discussing spiritual matters with Drew whose religion was mostly ‘cultural’.  There was no real gospel message per-se, but the underlying Christian theme was there, and the notion of how Madeleine’s faith helped her deal with some of the pain her character experienced.

Altogether Rules of Murder is generally an original and clean mystery story inhabited by some colourful characters and a pair of unlikely sleuths (though I’m not entirely sure if some of Drew and Madeleine’s public displays of affection would have been deemed acceptable for an unmarried or non-engaged couple of their social status at this time). I wouldn’t call it a ‘cosy’ mystery due to some issues towards the end, and which may be off-putting and render it not according to everyone’s taste.
Would I read the next book in the series? That may be an open question...