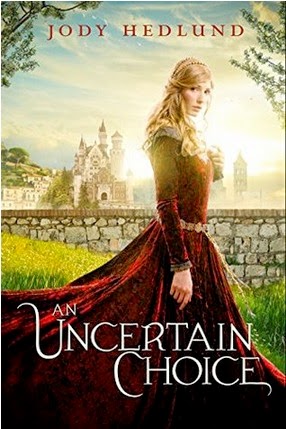 
I enjoyed this book at first, in spite of some reservations, but by the end there was just too much I didn’t like for it to merit a higher rating from me. Yes, it was a sweet story about growing up and finding true love, yes there were some well-drawn characters, and the core of the storyline was original. Yes, I think children might like it, and I appreciate that it is aimed at a Young Adult audience, and it supposed to have a fairytale like feel, but… there were many issues, some common to the Romance genre. Clichéd situations, predictable ending, etc, but I suppose that’s to be expected.

However, my main gripe was Lady Rosemarie- in some ways she was endearing- but way too perfect, and too headstrong. In truth, I think she may have been one of the most the most frustrating heroines ever. Her actions were frequently inconsistent, contradictory and her outlook often more like that of a modern liberal than a Medieval person.

Like how she was constantly saying she wanted to be a strong leader, uphold law and order and rule justly- but the one of the only time we see her dealing with crime she insists on letting thieves free because they were only trying to feed poor little orphan children.
Indeed, I actually found myself sympathizing with the nasty sheriff on occasion, as Rosemarie seemed to stop him from doing his job at every turn- not allowing him to arrest known miscreants for a serious crime, or continually thwarting his attempts to control contagious disease with her insistence upon entering infected areas to distribute yet more food to the poor.

Elsewhere, she would thank her fellows for giving her wise advice- then almost immediately go against it by entering areas believed to be infected with disease to distribute food- and by doing so recklessly risk infecting all the people at her castle. Or, continually, she would harp on about how the knights were so honourable they would never dream of doing anything inappropriate in public, and agreeing on her need for a chaperone--- yet almost every time she went out with one of the knights was unchaperoned, and they’d end up almost kissing or touching in public.
Yet after all this, she would complain about how she wanted her fellows to treat her like a responsible adult- when she didn’t seem capable of behaving like one half the time.

Even her charity to the poor seemed contrived. Yes, her wanting to feed the peasants and sick was all well and good- but it was all she seemed to be bothered about- chapter after chapter she was agonizing about the poor little peasants having enough to eat.
Seriously, it was as if the entire population of her lands utterly incapable of producing their own food or working to support themselves?
I agree with another reviewer who asserted that the poor folk seemed like nothing more than props to make Rosemarie look good…perhaps she’d have made a better aid worker or human rights activist then a ruler, as she didn’t seem to have a clue about the realities of estate management or government.

My main issue was the frequent mention of torture . We get the point very early on that good little Rosemarie disapproves of it, and had banned it in her lands (even though it is claimed that it was acceptable elsewhere), but throughout the story she continually goes on and on about it.
Although there was nothing too graphic, I really felt that there was far too much emphasis placed upon torture, and it was much overused-like every time drama was needed, there would be another torture scene or attempted murder--and the methods used were almost so extreme as to be rendered unbelievable. More like something you’d see in a visit to the London Dungeon or a movie than reality.

Now I understand this was a work of fantasy set in a fictional country, but I still assert that the representation of torture as normal and widely accepted punishment for almost every crime (or even the suspicion of crime), which could just be summarily inflicted upon a person on the order of a noble was totally inaccurate and pointless.
In real history by the fourteenth century (when this story is set), torture was actually rare in England, and even banned under common law, except in cases of treason and heresy.

I can say that having studied the Medieval period for years, I’ve never heard of anyone being boiled to death or racked for stealing- as almost happens early on in the story.
It’s almost as if, because the story was set in the Medieval period, it had to include torture, and other nastiness just to emphasize how horrible life was at this time, how horrible some of the characters were, and how good Rosemarie was in comparison.

Even leaving accuracy aside, it is perhaps a sad reflection on our society that references to torture, extreme brutality, hordes of unwashed peasants and streets flowing with excrement seem to be compulsory in stories set in the medieval period (and others). As though readers will regard an author’s work as ‘unrealistic’ if it does not depict Medieval Europe- or even a fictional Medieval society- as some orgy of violence, lawlessness, starvation, disease and misery populated by largely corrupt upper classes who can go around killing each other’s families and doing lots of other nasty things without penalty.
Its a shame, because this book certainly had a lot going for it otherwise, but the above really spoiled my enjoyment.

I received a free E-Galley of this book from the publisher via Netgalley for review, I was not required to write a positive one and all opinions expressed are my own.