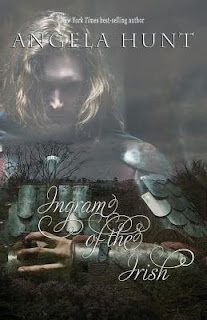 Learning of his Irish origins, a proud English knight seeks the secrets of his birth. But the truth shatters his illusions, leaving him struggling with God's purpose for his life.

"This is an excellent scripting of people and events in England and Ireland during the third quarter of the twelfth century. The author has obviously read widely in the sources and has stuck closely to the exciting, passsion-laden sources of the era. In some ways it becomes extremely relevant as an assist in the understanding and interpretation of today's Anglo-Irish confrontations. . . [Angela Hunt] has a great gift for bringing the dynamic currents of an era together.

My second book by this author was in some ways an imrovement on the last. No potatoes, Turkey and Hickory trees in twelfth century Europe this time- but this does not mean it was entirely accurate- as I will explore later.
I give it a highter rating in part because the story was well-written and it did keep the reader's interest. In some sense, it could be called a 'coming of age, or self-discovery tale, about a man seeking to find his family and place in the world.

It wasn't perfect- there were certainly some cliches, and rather 'black and white' characters- mostly either practically perfect, or diabolically evil, and sometimes making some very silly choices or decisions, and having sudden changes of heart. Yet they were mostly relatable, and the hint of romance I think helped add a lighter touch to a story that could otherwise be very 'masculine' and about just war and fighting.

There were some good themes about loyalty, following God and doing the right thing. I just worry about the idea reflected in a lot of stories like this, that this entails almost unquestioning loyalty to a particular faction or group- and the nationalist, sometimes very extreme nationalist, ideas that go along with that.
So if God wants Ingram to fight for Ireland- what does that mean- not just that he favours that side, as was a normal belief at that time- but that he hates the English- as would seem to be reflected by the way that at one point Ingram calls the Normans 'infidels'. A term usuallly applied to unbelievers or pagans at that time.

The subject matter was interesting, especially for one not acquainted with Irish history- however- I really felt that the author was looking at Irish culture and history with Rose-tinted glasses.
I understand that her background is Irish-American, so one would expect her to get a little nostalgic, but this novel almost presents the country and culture as some kind of egalitarian Utopia, and haven of modern, democratic, liberal ideals.

In the early part of the book, comparisons are contanstly being made between Ireland and Anglo-Norman England, where the hero Ingram grew up- and many seem to be based very inaccurate indeed. For instance, one passage reads:
"In Ingram's world, noble ladies did not argue with men, they were not bold or boistrous, and they never openly contradicted thier lords, masters or lovers.
In England, noble women were continuously gaurded or confined strictly to thier castle inventions and workrooms. Men did men's work, women tended to the castle the food and thier hours of sewing the garden"

So basically saying that English women were all downtrodden shrinking violets locked in towers. Yeah, right! Had the characters not heard of Eleanor of Aquitaine, one of the most famously independant women of the Middle Ages, or the Empress Matilda, her mother-in-law, who led armies and claimed the English crown in her own right. Eleanor composed music, her daughter by her first marriage became a famous poet.
These are just a few examples of educated, intelligent, independent women who existed in contemporary England or France.
Considering that Eleanor and Matilda appear briefly in the story, such a generalisation appears all the more absurd. I mean seriously, considering that a number of historical tomes are listed in the bibliography, where the heck did the author get such an idea?

Yet the generalizations do not end here, elsewhere it is claimed that Irish customs regarding land-tenure, law and order, and the rights and duties of the King are so very much fairer and nicer than those which existed in England- so that Ingram naturally concludes Ireland was the more civilized state.
Again though, the proclamations of superiority are sometimes based on mis-information, and at other times just plain wrong. In one place it is claimed that the Irish custom of dividing lands amongst male relatives, and giving females a life interest was vastly preferable to the English system of primogenture. Yet even under primogeniture- women could, and frequently did, inherit in the absence of a son or brother. Something we are told Irish women could not do. So this raises the question, of wther thier system really so much better in every way.
Indeed, at the extreme one could argue that to promote such an idea of cultural superiority, with a shaky historical basis, is bordering on the xenophobic.
Hence, as is to be expected, the Normans (who really seem to be equated with the 'English' or the 'British') who evetually came to Ireland are vilified as evil tyrants and brutal killers- yet when the Irish - and especially the 'goodies' kill their political enemies, there seemed a palpable difference in tone, and a lack of condemnation.

Like it was somehow okay for characters like the Irish King O'Rourke and his allies to execute thier hostages and prisoners, but if the other characters do it, it was near enough regarded as a war crime. Also, what is it with this idea that knighthood was some kind of sacred vocation whose practitioners had to be near enough beyond reproach?
Historians of recent times have demonstrated that weakness of this idea, such how chivalry did not often apply to peasants. Even Edward Bruce of Scotalnd had few qualms about killing Irish peasants- his supposed 'Celtic brothers' with impunity, for instance, and the rules of war could allow even for massacres of the population of towns and cities.

Perhaps with sounds like a rant, but I am finding such representations of history in novels to be increasingly fustrating and objectionable- to the point that I am not entirely trust such novels when they are written by Americans.

It is unfortunate really, and the events in question could not really be overlooked in a book set at this time, and there was a good story, but once again I think it could have been done better.