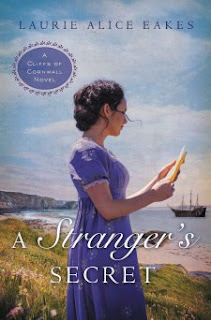 As a grieving widow, Morwenna only wants to make a life for herself and her young son at her murdered husband’s estate. Until an unconscious man washes up on her shore, entangling her in a web of mysteries that threatens everything she holds dear.

Still grieving the loss of her husband, Morwenna Penvenan fills her days preserving her son’s heritage: the dilapidated estate his father left them. But all attempts at restoration are thwarted when she is accused of deliberately causing ships to crash on her shore in order to steal their cargo. While seeking clues to the true culprits, she finds an unconscious man wearing a medallion with the Penvenan crest enameled upon it.

Upon learning of his father’s death, David pursues answers to the many questions left in his father’s wake: Why was his father in Cornwall when he said he would be in Scotland? Why did he die in possession of a medallion belonging to a prominent Cornwall family? Why did his father take money from the family’s ship-building business? And why did someone kill him? Only after waking up at the Penvenan estate under Morwenna’s care do the pieces start falling together.

As David recovers in Morwenna’s house, they grow to care about one another, while knowing each have reasons to distrust the other. The closer they work together, the more they learn how their lives—and mysteries—are entwined. As the past continues to intrude on their lives, they must learn to ask the Lord and others for help or risk losing each other and maybe even losing their lives.

A Stranger’s Secret is the sixth book I have read by this author. In some ways, I might say it was better than the previous title in series, with its somewhat worn characterization of the superfluous and wonderful American hero. Morwenna was an interesting character in the last book, and is the protagonist in this one, which made things somewhat more interesting to see her come into her own, and her perspective on events.
I am sure though that her son’s name was changed- I’m sure I remember her calling him Conan after his father in the last one- but now he’s called Mihal- some kind of Cornish version of Michael, apparently. As for the hero- well like most in romance novels is was hugely handsome- though not as annoyingly sanctimonious as Rowan Curnow from the last book, and was at least credible. Except perhaps his Somerset accent.

There were also some wonderfully evocative and realistic depictions of the Cornish landscape, with some exiting scenes- but- I could say the first part of the novel was better. By the end I felt that the mystery was drawn out for too long, and events as well as the characters actions and responses became too predictable and repetitive. I mean David was poisoned something like three times- and the device of every chapter, or almost every chapter, having to end with some dramatic event or cliff-hanger just didn’t always work for me. Could this reader be forgiven for mentioning Drama at the expense of other aspects of good storytelling?

Sadly also, this novel seemed to have a lot of the clichés of romantic fiction, with characters kissing and touching at really inappropriate or illogical moments- including in company- beating themselves up about how it was totally unseemly- then doing it again. I also found some of the characters attitudes annoyingly inconsistent.
Morwenna’s grandparents for instance seemed to be presented as loving and having her best interests at heart one minute- then shortly after she would be griping about how ‘authoritarian’ they were. I have noticed that a few other books by this author seem to level the same accusation at authority figures such as parents- and it times it seems to be for no other reason than that they won’t let the protagonist do what they want- even if it’s dangerous, stupid or illogical, because it goes against their ideas of personal ‘freedom’.

On a personal level, I did not appreciate the passage in which one of the characters was scornful of the idea of freedom and equality- saying another character who believed it was as bad as an American- which seemed to be implying that such ideas were alien and abhorrent to ‘proper’ high-born Brits. To me, this seems a very arrogant notion, suggesting that Americans invented freedom and had some kind of monopoly on it. American readers might attack me for this- but I don't like seeing such ideas in a work of fiction- not least when they are inaccurate.

Gripes aside, I would say this book was a marginal improvement on the last one, which annoyed me for several reasons which were mostly not present here. It is honestly not a bad novel, I just don’t think it’s that brilliant or has much to make it stand out from the crowd. Certainly worth reading as a decent regency with an interesting backdrop and a solid Christian theme. This series and author are not personal favourites, but others make like them better.

I received a free Kindle Edition of this book from Zondervan via Booklookbloggers for review. I was not required to write a positive one and all opinions expressed are my own.