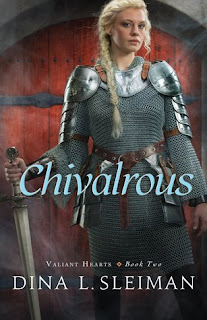 Strong and adventurous Gwendolyn Barnes longs to be a knight like her chivalrous brothers. However, that is not an option for her, not even in the Arthurian-inspired Eden where she dwells. Her parents view her only as a marriage pawn, and her domineering father is determined to see her wed to a brutish man who will break her spirit.

When handsome, good-hearted Allen of Ellsworth arrives in Edendale searching for his place in the world, Gwendolyn spies in him the sort of fellow she could imagine marrying. Yet fate seems determined to keep them apart.

Tournaments, intrigue, and battles--along with twists and turns aplenty--await these two as they struggle to find love, identity, and their true destinies.

A trilogy, that common animal in Fiction, can be a mixed bag. The first book can be wonderful, whilst others fail to please, or vice versa. Such was the case for me with Chivalrous. I did genuinely like Dauntless, the first book and the series- and that is high praise from me, who sets my standards for Medieval Fiction very high indeed.

In such cases, it’s best to start with the positive. Chivalrous was a tight, well-told story, with some important messages, and delivered its main religious theme about trusting God in difficult and seemingly impossible circumstances well, without being too preachy. Readers of the first book might also enjoy seeing Allen of Ellsworth, an important character from the first book, come into his own. There is also plenty of action, adventure and intrigue to keep young adult readers enthralled- as well as plenty of romance.

However, for me there some major deficiencies. One thing was that I never really warmed to the female protagonist, Gwendolyn. Like Merry from the first book she adopts a traditionally male role, that of a wannabe knight- but unlike Merry, her wish to do this seems to result more from rebellious obstinacy, and a refusal to conform to social norms than anything else, and some crazy idea that by acting like a boy, and doing things she knew her father disapproved of she could somehow win his approval.
In the early part of the book, she just seemed like a brat with a chip on her shoulder because she was not allowed to play with swords and was expected to stay in her family’s castle, and do ‘boring’ things she did not want to do. Even her basis for rejecting religion (namely that it supported and endorsed the repression and subjection of women and the lower classes) seemed contrived, clichéd and hopelessly anachronistic.

Okay, so the idea of a medieval woman fighting is not so implausible. Yet the notion of a teenage girl with no direct military experience being able to best trained soldiers, or even kill fully armoured knights on the battlefield when not even wearing a helmet (essential for preventing serious head injuries, or death) and escape unscathed is a bit much. Even for men, failure to use the proper armour or equipment in battle proved fatal, so how could she manage without it? Is this really a credible and constructive example of female empowerment?

Again, I had no problem with the issue of domestic abuse in this story. These things do happen and it’s necessary to explore them at times. However, I do object to the idea that Gwen’s situation- that of having a father who abuses her mother, and even his children, was common in medieval times, and such actions were generally considered acceptable. Nor do I accept the claim that Gwen’s father’s attitude towards women and their roles were normal for the period.
One example would be his belief that women should not ride horses because it could damage their genitals- which seemed to me patent nonsense historically- there are plenty of medieval illustrations that show women riding and I have never heard of anyone at the time raising such an objection.
No doubt fans will take issue with me remarking on historical accuracy in this regard, but there were cases in Medieval Britain of women taking abusive spouses to court, or 'naming and shaming' them in front of the neighbourhood. Too put it simply, women, even in the 'bad old Medieval' days were not entirely without redress to law and rights. So why do we have to go along with the 'repressed chattels' stereotype as typical of the period- and strong, valued, women in loving relationships as the exception?

I also had issue with how prevalent forced marriage was in this story. It is something else I have a problem with in fiction- mostly because the church actually banned it in the eleventh century, and that it was actually quite hard to get past this ban because of how the law worked. Despite this, many authors seem to ignore or discount the ban, and make out that it was the norm-even though the evidence shows many noblewomen chose their own husbands. I mean, why? I understand drama makes for an interesting story- but does every arranged marriage have to be unhappy and everyone miserable and abused to make a good story?

Even the notion of North Britannia being a ‘progressive’ state got to me, because of the way this was treated. Basically, it’s supposed to be some paragon of medieval chivalric ideals, and Christian virtues in the midst of the universally corrupt society around it. I can accept that this is meant to be ‘dystopian’ fiction- but it’s almost too dystopian.
The characters constantly harping on about how ‘progressive’ they were, whilst pointing the accusing finger at anyone who did not share their ideals smacks too much of modern liberalism, not to mention that they actually come across as quite condescending, something along the lines of "Oh, thank goodness we're so enlightened, and so much better than those stupid, backwards, repressive English. We're so wonderful and smart, they copied the Magna Carta from our ideas!"

An idea supported by the fact that the villain was opposed to this ‘progress’ and wanted a return to ‘traditional feudalism’ which under which were rejected  such notions as rule of Law, rule by council, democracy and equality. The problem this representation in inaccurate- and such notions were not alien and repugnant to Medieval Englishmen.
The notion of rule of law existed in English society before the Magna Carta, most Medieval Kings had councils, and it was a nobleman who established the British parliament including the House of Commons, in the same century as this book is set.

More generally, I was concerned with the attitude towards authority that was held by some of the characters. The most progressive North Britannians seem to have little time for the idea that fathers should be able to ‘rule their household’ and have a legal right to authority over their wives and underage children. Yet this concept is supported in scripture- although not in the way that Gwen’s father uses it, but the characters in question seem to consider the notion itself to be wrong and unjust.
Allen and his fellows seemed to think that if the political authorities, in this case the Council that he was meant to be leading, supported something which that regarded as tyrannical, unfair or unjust, they should ‘follow their own heart’, and the alleged leading of the Holy Spirit- instead of being ‘ruled by men’. At one point in what could really be seen as little more than a fit of teenage pique,  he condemns said council as ‘tyrannical’- because it would not let him run off and rescue a damsel in distress, instead of facing his responsibilities and running the Dukedom.

The New Testament contains a number of passages which expressly state we should obey those in authority, for God puts them in that place, and even be subject to Kings and rulers. Only if they require us to do something which is expressly against Christian teaching is there any precedent for refusal to obey. Not just because we don’t like or think it’s right. Not just because they will not let us do what we want.
Now, I do not in any way condone the abuse of this power that Gwen’s father represents- but nor do I believe we should pick and choose which parts of the Bible we want to believe, and reject that which does not fit in with our ideas. The idea that you can reject anything in mainstream religious teaching, or that any authority figure tells you that conflicts with your innate idea of ‘doing what is right’, as the characters often seem to do, is one that is worrying.  Especially since the characters in question are basically a bunch of green teenagers, with no experience of rule, and yet think they know better than seasoned politicians, parents, religious leaders etc. Not very positive role models for teenagers today who might already have a problem with authority.

I almost think Rebellious could have been a fitting title for this novel, which would really have worked better as the original concept of historical fantasy rather than historical fiction. I would consider reading the next title in this series, and I’m not meaning to imply the author is deliberately misrepresenting anything, but just to proceed with caution.

I received an e-galley of this book, from the publisher via Netgalley for review. No other remuneration was given and all opinions expressed are my own.