The Fate of Arcrea- Nicole Sager 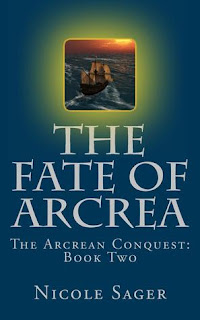 Return to the kingdom of Arcrea,
where the stage is set for an epic battle between good and evil.

Trenton is a young Mizgalian caught up in the deadly beliefs inspired by a life in his father’s garrison. When a simple mission in Arcrea unearths the shocking truth of a mystery two decades in the making, he is left with a choice that may decide the fate of an entire kingdom. Join old friends and new on a journey of discovery, where battling vicious beasts and conquering a coast of dragons will test the mettle of men and set the pace for an adventure like no other


Good Christian Fantasy with some sounds messages and memorable moments- but with a few of the drawbacks of the last book. Seemingly invincible heroes, and fight scenes that whilst exiting- seemed to be lacking something. Why does nobody seem to wear armour- or if they do why is it so easy to dispatch enemies?
Also, as before, villainary seemed to be determined more by social class and political affiliation more than anything else- in spite of the character's sentiments about there being evil everywhere.

It was interesting to read more about a lot of the characters from the first book, and see some of thier situations resolved, and its a good, easygoing quick read. Preachy in places, but that does line up with the intention of the author, so its not a cause for major complaint.
Perhaps its just not the type of fantasy that I really go in for. Too many Americanisms I think to be a convincing Medieval world, and I did notice a couple of scenes and details that may have been 'borrowed' from various movies. Still worth a read.

Thankyou to the person who loaned me this book.