Murder at the Mikado- Julianna Deering 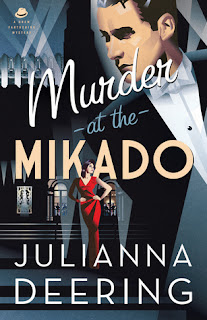 Just as Drew Farthering thinks his life has found smooth waters, Fleur Landis, an old flame, reappears in his life. She's married now, no longer an actress, and he expects she'll soon disappear--until she comes to him in dire need. The lead actor in her old troupe's production of The Mikado has been murdered, and Fleur is the police's number one suspect.

Drew would love nothing more than to just focus on his fiance, Madeline, and their upcoming wedding, but he can't leave Fleur in the lurch--even if she did break his heart once. As Drew, Nick, and Madeline dive into the murder, they discover more going on behind the scenes of the theater troupe than could ever have been imagined. Nearly everyone had a motive, and alibis are few and far between. It's Drew's most complicated case yet.

Since I requested the newly released fourth title in this series from Netgalley a while back, I decided it was high time to read this, the third one, first.
I had rather mixed feelings about the previous two titles when I read them a couple of years back, and I think I can say the same for this. As a mystery buff and a fan of the classical authors like Agatha Christie, I should love a mystery set during thier the time of thier stories, right?

Yet, sadly I just didn't. It wasn't a terrible book, but I just didn't much care for it. Other reviewers have mentioned how they found the story rather hardgoing, and not very engaging, and I have to agree. I also found the plot rather choppy, and some events predictable or convenient.
The protaganists seemed more concerned with their relationship then actual detective work- which is fine if this is well written. In this case however, I just did not really find I could connect with the characters, or thier feelings, decisions and actions.

Also, this one just did not have the 'feel' of the classic mysteries. Oh, it had the details right, but it seemed slightly lacking in authenticity and credibilty. Perhaps it was the Americanisms used by the British characters, or the sometimes awkward, clumsy-sounding dialog like 'she never much let anyone have any'.
Good mysteries don't have to be very complicated, but by the end, one could almost be forgiven for thinking that the police could have solved the whole thing themselves before long, and the characters really weren't needed. Like they just went around in a lot of circles until the final clue was found, and then all of a sudden everything fell into place and the gulty parties very oblingly confessed.
Nor was the conclusion entirely satisfying- at least not for me. Motives and reasons for the crimes did not seem entirely clear, or rather unconvincing.

As said above, the book wasn't terrible. There were some humourous and cute moments (like Drew with little Peter). It just wasn't my cup of tea.

Want to buy the book? See the link below