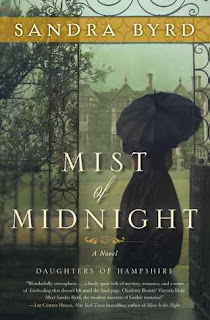 In the first of a brand new series set in Victorian England, a young woman returns home from India after the death of her family to discover her identity and inheritance are challenged by the man who holds her future in his hands.

Rebecca Ravenshaw, daughter of missionaries, spent most of her life in India. Following the death of her family in the Indian Mutiny, Rebecca returns to claim her family estate in Hampshire, England. Upon her return, people are surprised to see her… and highly suspicious. Less than a year earlier, an imposter had arrived with an Indian servant and assumed not only Rebecca’s name, but her home and incomes.

That pretender died within months of her arrival; the servant fled to London as the young woman was hastily buried at midnight. The locals believe that perhaps she, Rebecca, is the real imposter. Her home and her father’s investments reverted to a distant relative, the darkly charming Captain Luke Whitfield, who quickly took over. Against her best intentions, Rebecca begins to fall in love with Luke, but she is forced to question his motives–does he love her or does he just want Headbourne House? If Luke is simply after the property, as everyone suspects, would she suffer a similar fate as the first “Rebecca”?

A captivating Gothic love story set against a backdrop of intrigue and danger, Mist of Midnight will leave you breathless.

As I have a review copy of Bride of a Distant Isle I thought it was high time to finish read the prequel. (Yes I make a concerted effort to read series and trilogies in order now). Anyway, I had seen The Mist of Midnight described as a Victorian Gothic style Romance.
I would say that built up the expectation for the story to be a lot darker, sinister, and more in the style of a thriller or deep mystery. There was mystery and some element of danger- but not what I would describe as 'Gothic'. That was not a bad thing per-se  just an observation.
There was certainly something to be said for the style. I would call it thoughful and character-driven, rather than relying on action and implausible events and scenarios as some novels of this genre do.

The setting, and the details about British India in the second half of the ninteenth century were very interesting. I must admit that I tend to have a soft spot for socially awkward protagnists and misfits. Rebecca Ravenshaw was very much the former in the early parts of the book- suddenly thrust back into a culture and country she had left as a child.
Her faux-pas and uncertainty made her vulnerable, but she still had a certain determination and resolve. In other ways, her knowledge and sensitivity to other cultures added depth, and a certain exoticism to her character.
The male protaganist, Captain Whitfield was suitably dashing and charming- but the author added the clever twist of his 'dark side'- or suspected dark side.

Although this was a Romance, it was not (generally) of the fluffy and sillly variety which I find rather off-putting. A lot of the story seemed to be more about Rebecca finding her place, proving her identity and setting herself up as as Lady of the Manor. She was not constantly fawning over men- although her behaviour seemed to suddenly change at the end of the story, with her becoming all teary and pining over Captain Whitfield. It didn't entirely seem to fit with how she was before.

I did notice a few Americanisms here and there (at one point Rebecca says 'someplace' instead of somewhere- and talks about 'drapes' rather than curtains). Also, on occasion the langauge and wording seemed rather clunky and complicated.

Overall though, it was a well- written story with a steady pace and a strong 'sense' of period. A good choice for historical fiction lovers seeking something clean and satisfying with a nod to the classics.