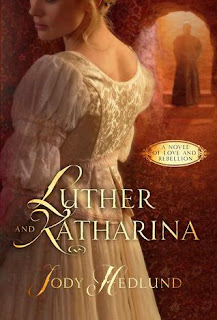 Katharina von Bora has seen nothing but the inside of cloister walls since she was five. In a daring escape, Katharina finds refuge with Martin Luther and seeks his help to pair her with the noble, wealthy husband she desires.

As class tensions and religious conflicts escalate toward the brink of war, Martin Luther believes that each day could be his last and determines he will never take a wife.

As the horrors of the bloody Peasant War break out around them, the proud Katharina and headstrong Martin Luther fight their own battle for true love, in one of the greatest love stories of history.

This was my fourth book by the popular author Jody Hedlund. I don’t know very much at all about Martin Luther, so last year I decided to request this book about him. It looked good, even if I would not be easily able to distinguish fact from fiction. This was plugged as being the first outright Historical Fiction work by this author (as opposed to her previous Historical Romances), but personally I did not notice a whole lot of difference. There was still a very strong element of Romance and a lot of romancey scenes. I suppose the subtitle ‘A Novel of Love and Rebellion’ should have been a clue. For those who enjoy historical romance this would not be a problem, but those who expected something different might be disappointed.

I do believe that whilst Mrs Hedlund is a good storyteller, her stories are not always well executed. They tend to be very dependent on ‘dramatic devices’ such as violence, both physical and sexual and throwing every adverse circumstance possible at the characters. The Middle section of the book is like a constant round of killing or the mention of killing, kidnapping, rape or attempted rape. For example, the word ‘torture’ is used 9 times, ‘abuse’ 10 times. For a book of just under 400 pages, if you average it out, it’s like a mention of torture or abuse every 20 pages.
I understand there was a Peasant’s Revolt and a virtual war between the Princes and Peasants, but the book just seemed to get really, really repetitive at this point, with Luther agonizing about the actions of the peasants, but wanting to support them, and flitting back and forth between sympathies and alliegances.

Also, I found Luther to be an incredibly frustrating character. We are told numerous times that he was totally against violence, and would condemn the use of violence by either side. Yet he seemed to be constantly prepared to make excuses for the peasants saying ‘their demands have merit’, and harping on about ‘freedom’- even when they were going about raping nuns and disembowelling priests in the name of his reforms. Then, when the nobles supress the revolt, which he advised them to do, he condemned them for it, because they used violent means and he was meant to be the protector of the peasants. Protector of what? Murderers and rapists from the consequences of their actions?

Although my knowledge of this period is limited, a number of details struck me as rather modern. One was Luther’s outlook, particularly when it came to politics and the ‘freedom’. I almost wonder whether American authors seem to have some odd need to interpret everything in European history as some sort of ‘class war’ or in light of their revolution. There were a number of modern terms and phrases (I’m sure one of the characters said ‘gal’ at one point), and the way in which Katherina would occasionally whine about nobody having the right to ‘control her life’.

I also did not feel the treatment of the church was always entirely fair and accurate. I know the 16th century Catholic church was corrupt, I know the Reformation was needed, but the depiction just seemed to be taken to extremes. Thus the Abbott of the Abbey from which Katherina escapes was a sadist and a rapist. I mean how stereotypical can you get- the evil and immoral cleric? It’s also said that she and many of her fellows ‘had no choice’ or were forced by their families into the celibate vocation of being nuns. This detail in particular did not ring true, because whilst there were some people who were put into monasteries and nunneries as children, many people still chose to enter them or go into the church willingly.  Finally, there was absolutely no mention of the way that Luther went off the rails in his later years, and became not only an anti-Semite, but as oppressive as the system that had been thrown off.

Perhaps the author was simply unaware of this, but Luther seemed altogether rather too heroic and perfect, as well as the ideas he represented.  It’s like as long as the lead character represents the ‘true gospel’ social equality and ‘freedom’ or Protestantism against the supposedly evil ‘system’ or ‘institutional religion’, then they and everything they stand for is all sweetness and light. Sadly, that’s not always the case in real life.

I received a copy of this book from the publisher via Blogging for Books for the purposes of leaving a review. I was not required to write a positive one and all opinions expressed are my own.