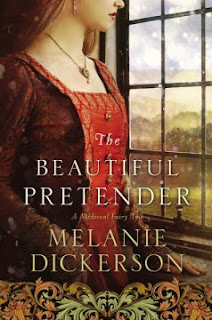 After inheriting his title from his brother, the margrave has two weeks to find a noble bride. What will happen when he learns he has fallen for a lovely servant girl in disguise?
The Margrave of Thornbeck has to find a bride, fast. He invites ten noble born ladies who meet the king’s approval to be his guests at Thornbeck Castle for two weeks, a time to test these ladies and reveal their true character.

Avelina has only two instructions: keep her true identity a secret and make sure the margrave doesn’t select her as his bride. Since the latter seems unlikely, she concentrates on not getting caught. No one must know she is merely a maidservant, sent by the Earl of Plimmwald to stand in for his daughter, Dorothea.

Despite Avelina’s best attempts at diverting attention from herself, the margrave has taken notice. And try as she might, she can’t deny her own growing feelings. But something else is afoot in the castle. Something sinister that could have far worse—far deadlier—consequences.

Melanie Dickerson’s latest fairy-tale retelling was a lovely, quick light read. The typical, slightly whimsical style it retells a classic story (in this case The Princess and the Pea combined with elements of Beauty and the Beast) in a real Medieval setting with romance and a touch of intrigue. Mrs Dickerson has done a Beauty and the Beast retelling before with her second novel The Merchant’s Daughter but this one was original and satisfying enough to not cause any problems.
Those who read the last book The Huntress of Thornbeck Forest, will know some of the characters including the darkly mysterious Reinhart, Margrave of Thornbeck. (Margrave is defined as a military commander in charge of the defence of a province of the Holy Roman Empire). Avelina is sweet, but not Saccharine sweet and too perfect or infallible.

Reinhart gets his own story as the protagonist of this story, and he did turn out to be a fascinating and endearing character. In the last book there was a hint that he had more to him then the characters thought, and was not so evil, and this promise was delivered well. There are also some great supporting character including the young Magdelena, the daughter of a nobleman sent to Thornbeck as a potential suitor for the Margrave.
I do believe this was one of Mrs Dickerson’s stronger stories, as it’s not too fluffy or predictable and seemed to be more character-driven. I hate it in Romance stories when characters just think about kissing instead of more important and pressing matters. I did enjoy the scenes with King Karl at the end. It the first time a monarch has ever been present in one of the stories by this author, though they’re often mentioned. He could be imagined as as a little like Brian Blessed, looming large smiling, bearded and bellowing to bring about the resolution of the story.

My only complaints were with some of Avelina’s attitudes. Her ideas about nobles being equal to peasants were understandable, but seemed too modern, as did her ideas about romantic love and marriage. I don’t like I when its automatically assumed that arranged marriages were unhappy, but that was very much the case here. (Reinhart’s parents married for duty and were miserable- the usual cliché). History shows us plenty of examples of couples contented in arranged marriages, and I wish they would get more fair treatment in fiction.
Recommended for fans of historical fiction and light romance, as well as established fans of this author.

I received a copy of this book from Thomas Nelson via Booklook Bloggers for the purposes of writing a review. I was not required to write a positive one, and all opinions expressed are my own.