Beneath Outstretched Arms by Venessa Knizley 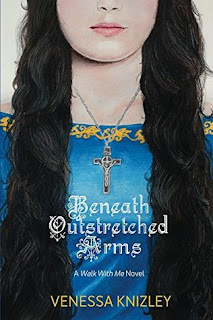 The year is 1348—and the Black Plague has reached England. Forced to leave her betrothed behind, Lady Velena Ambrose arrives at her father’s countryside castle, grief stricken—and burdened with fears. She embraces her seclusion, but she is not to remain alone.

Though suffering great loss, Esquire Tristan Challener arrives at the castle, able to find comfort in the Bible that a friar has secretly placed in his satchel.
Velena desperately needs the book that Tristan keeps safely hidden in his room, but is it wise for her to find companionship with a man who is not her betrothed? Will darkness make its abode in her forever, or will she finally be set free to see that God is good, and that there is rest to be had, beneath His mighty outstretched arms?

Beneath Outstretched Arms is the first of four books to be released in this compelling new medieval series, Walk With Me.

I did not know what to expect when I purchased this book. It had good reviews, and many may know I’m a sucker for good Medieval Fiction (unless other reviewers or a search flag up serious issues that would put me off). For the most part, I was pleasantly surprised. It presented a realistic and evocative account of a family caught up in the middle of the Black Death. We cannot, and I hope never will, have to imagine what it would be like to face such terrible circumstances, it is no wonder they though the world was ending.

The heroine Velena’ and her fellows’ hopelessness and despair were well written and entirely understandable. It was on this basis that the story was built. I agree with another reviewer who said there are very few well- written and authentic Christian Medieval novels. Most are silly, whimsical, or depend on shocking violence and torture to keep the audience interested. This was not one of them.
There was romance, but it’s not silly or mushy, in fact both parties expect to marry other people and so keep their contact within certain boundaries. Rather, the story is an account of the converging lives of a number of young people, and their choices and decisions. The main ones are Tristan and Velena, but there are other supporting characters who may well play an important role in future books, including some of the household knights and staff. There is also an element of family drama, with the strained relationship with the Uncle’s side of the family.

I appreciated the way that Velena was shown to be close to her father, who is presented as a strong ruler, yet also tender and loving to his family. All too often in stories like this, fathers are presented as draconian brutes who want to force their hapless daughters into unwanted marriages. The age old cliché, which I think dehumanizes our Medieval forbears by simply making them props to represent the prejudices of the modern world.
One could also tell that the author had done her homework on the setting, with the descriptions of life in a castle, and certain customs or details about social life. Usually, it was authentic and plausible. The only problem I had was with some of the language, which was riddled with some modern Americanisms and several uses of the word ‘Okay’. I don’t believe these are present in the paperback version, and I think it was a genuine mistake which is not used in future versions. That said, the British characters’ tendency for complaining about the weather was spot on, as were some of the phrases they used- and there were no references to non-indigenous flora and fauna like potatoes. A common mistake in a lot of Medieval stories.

There was a genuine and Gospel message in the story, which is entirely commendable. The only problem I had was that it came from the incorrect assumption that Medieval people did not read the Bible, and were totally ignorant of its content and teaching. This was not the case, Psalters (small books containing the Psalms) were popular in the Late Middle Ages amongst the Laity, and most people would have been familiar with the odd Bible story and Psalm. What is more, any vernacular rendition of the Bible in the fourteenth century would not have been the same as the versions we know today- they would have been based on the Latin Vulgate, and would have contained he Apocryphal books like Judith and Maccabees.
I suppose, with any novel like this, there has to be some balance between historical accuracy, and sharing the teachings of modern orthodox Christianity, which is going to result in the former falling by the wayside. It’s not a big deal, and not something I would lower the rating for, but it’s something I do feel warranted a mention.

Overall though, I heartily recommend this book, and will shortly be making my way through the second one which continues the story. It is a shame that more books like this don't get snapped up by the larger and well-known publishing houses, they deserve to be better known and advertised.