My Enemy, My Heart by Laurie Alice Eakes - New Release 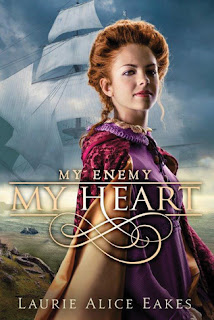 The sea is Deirdre MacKenzie’s home, and the crew of her father’s Baltimore clipper is the only family she loves. She’s happier wearing breeches and climbing the rigging of the Maid of Alexandria than donning a dress and learning to curtsy. But when the War of 1812 erupts, the ship is captured by a British privateer, leaving her father, the captain, dead. Deirdre watches her crew herded into the hold, destined for the notorious Dartmoor prison in England. Though her fate as a noncombatant is uncertain, she knows she must find a way to free her crew.

Kieran Ashford has caused his family one too many scandals. On his way to exile in America, he is waylaid by the declaration of war and a chance to turn privateer and make his own fortune. But he regrets his actions as soon as the rich prize is secured. Now his best chance at redeeming himself in the eyes of his family is to offer Deirdre the protection of his name in marriage.

But love and loyalty clash as Kieran begins to win Deirdre’s heart despite her plot to betray him. Will Kieran’s plan mend the relationship with his family, and can this fated couple find true love despite the secret lies between them?

This was a fair story, as far as Romantic Fiction goes, and it even worked quite well as a cross-cultural Romance with protagonists whose nations are at war. Yet it also represented everything I do not like about this author's work: An overly simplistic, nationalistic version of history which ignores the complexity and moral ambiguity of many wars and conflicts,  coupled with a woeful lack of familiarity with the history, politics, culture and society of Great Britain in the Nineteeth century.

It begins with a note blaming the British for starting the War of 1812, by picking on and bullying the Americans and continues in the same kind of bent. The Americans are depicted as the wronged innocents, whilst no mention is made of American aggression, including the invasion of Canada by the United States which occurred early in that conflict.
The first forty percent or so of the book follows Deidre aboard her father's ship after it is seized by British Aristocrat Keiran Ashford and his crew in the Caribbean. Sadly, it also involves a lot of Romantic 'mush' with kissing, touching (which was really not appropriate for a person who said he would not behave dishonourably towards any woman), and talking about 'stirring up feelings', alongside escape attempts, a proposal, and eventually a marriage of convenience between the protagonists.

As another reviewer says, the British characters do sometimes 'read as American', and use Americanisms. One example is how Keiran at one point refers to the heir to the throne as: 'The Prince Regent of England'. That was not his title: he was the Prince Regent of Britain, or Great(er) Britain. This inability to distinguish between England and Britain, even on the part of British characters, is common to this author's work: along with the fact that the Brits talk like Americans with posher accents.

In the second part of the book, Keiran brings the pregnant Dierdre home to his family's estate in Cornwall, and there is much conflict and angst between them because of misunderstandings, his past, and a mutual failure to communicate or trust each other. Although Keiran's family accept her, Dierdre does not fit in, a did act like a bit of a brat.
At the start, she got huffy because Keiran did not her he was an aristocrat- though I'm fairly sure other characters had previously referred to him as Lord- so it should have been obvious. Like the good Republican she is, Dierdre does approve of the aristocracy, because all the Newspapers she has read say they are the oppressors of the working classes (she had previously compared people in domestic service to slaves)  and- even worse, the unelected rulers of Britain. This is another common assumption in novels by this author- that nineteenth century Britain was some kind of backwards, feudal state still ruled by the nobility.
Clearly, Deidre had not heard of the elected House of Commons, the Second Chamber of Parliament, or the Middle Classes, for that matter.

Anyway, from the outset, Deidre plans to break her crew out of Dartmoor Prison, where they have been incarcerated with lots of evil, brutal redcoats as their guards. I'm gonna be honest: the continual griping by the characters about the horrible conditions in Dartmoor and inhumanity of locking people up there really got my back up- its not as if Britain was the only country in history to incarcerate Prisoners of War. France was doing the same thing at this time, and I'm sure even America did. And for goodness sake- what else were we meant to do: let enemy combatants go into the countryside?

It is at this point that the attitude of the characters becomes most hypocritical and reprehensible. Whilst agonising that American and French Prisoners might be cold or hungry, they do not even spare a thought for their countrymen- the British soldiers and sailors fighting Napoleon. Whilst Dierdre condemns Britain for attacking America, she has no qualms about setting her crew free knowing full well that they intend to go to France and fight for them against Britain.

She is troubled by no pangs of conscience so that her men are going to go and help the French fight against and kill the sons, fathers, and brothers of the local people who take her under her wing- and neither are the British characters who are prepared to assist her mission for that matter. There is no understanding or comprehension whatsoever of why Britain was fighting France.
At one point Deidre even assumes it is to protect the wealth and privilege of the Upper Classes, which is patent nonsense and even offensive. Not even mentioned is the very real existential threat to Britain posed by a man- Napoleon Bonaparte who had conquered much of Europe, and wanted to invade with a huge army.
We were fighting for our survival: not our convenience. It just something that many American authors who write about this period don't seem to get, and its incredibly annoying.

Overall, My Enemy, My Heart is a reasonable Romance novel.  but its not a favourite. No doubt the intended audience would go in for it, but I hope they don't learn their history from it.

I received an ebook of this title from the publisher via Netgalley for review, and purchased the audiobook of my own volition. I was not required to write a positive one and all opinions expressed are my own.