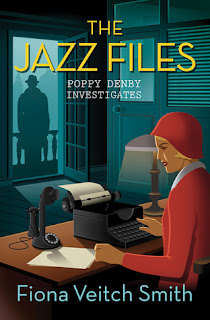 Introducing Poppy Denby, a young journalist in London during the Roaring Twenties, investigating crime in the highest social circles!

In 1920, twenty-two year old Poppy Denby moves from Northumberland to live with her paraplegic aunt in London. Aunt Dot, a suffragette who was injured in battles with the police in 1910, is a feisty and well-connected lady.

Poppy has always dreamed of being a journalist, and quickly lands a position as an editorial assistant at the Daily Globe. Then one of the paper's writers, Bert Isaacs, dies suddenly--and messily. Poppy and her attractive co-worker, photographer Daniel Rokeby begin to wonder if it wasn't a natural death, but murder.

After she writes a sensational exposé, The Globe's editor invites her to dig deeper. Poppy starts sifting through the dead man's files and unearths a major mystery which takes her to France--and into deadly danger.

Excellent Historical mystery from a British author (which is of course a real boon for me), set in the midst of the Jazz Age.

Methodist Pastor's daughter Poppy Denby comes to London after recieving a letter from her Aunt, who is secretly planning on helping her find a career.
At first she, but faces discrimination when she turns up at her interview for the role of a Manager.
They don't want a woman- a situation which the strong and independent niece of the former Suffragette Dorothy Denby is not willing to put up with.
With the help of some friends and new contacts Poppy is quickly introduced the enigmatic but eccentric Canadian editor of 'The Globe', as it quickly offered her first assingment- to report on New play showing in a top London Theatre.

Soon after meeting the leading lady, the fiesty Delilah Marconi and the death of another journalist Poppy learns of a possible cover-up involving the shady dealings of a corrupt peer, Melvyn Dorchester, in which her Aunt, Delilah's mother and several other members of a women's sufferage movement may have been embrioled.

Adventure, mystery, intrigue and danger ensues in this delightful mystery rich in historical details, and plenty of fiesty ladies, a flapper or two, and even a cameo by Marie Curie!
Readers may wish to note that although there are Christian themes in this story, it does not shy away from the tougher issues of life, or the realities of human nature.
So there is mention of characters losing their faith, having affairs, and one character accuses Poppy's Aunt of being a Lesbian (although I do not remember any indication that it was true).

I was invited to download this title from Netgalley by the publisher, Lion Fiction to read and review. I was not required to write a positive one and all opinions expressed are my own.