A Captive Heart by Michelle Griep 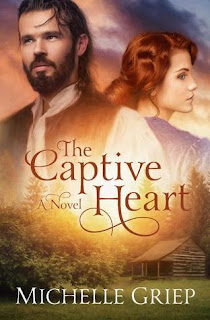 Proper English governess Eleanor Morgan flees to the colonies to escape the wrath of a an angry duke. When the Charles Town family she’s to work for never arrives to collect her from the dock, she is forced to settle for the only reputable choice remaining to her—marriage to a man she’s never met.

Trapper and tracker Samuel Heath is a hardened survivor used to getting his own way by brain or by brawn, and he’s determined to find a mother for his young daughter. But finding a wife proves to be impossible. No upstanding woman wants to marry a murderer.

Good story with plenty of adventure, some Romantic clichs here and there, but not the usual 'fluffy' fare that one sees in this genre. The 'Fish out of water' plotline with Eleanor dropped into the wildlands of Carolina was well handled.

The only thing I will say is, had I known a little more about the political background of his story I probably would not have requested it. It was well done, and added a lot, but as a matter of personal taste, I steer clear of anything set during the American Revolution because of the racism and rabid anti-English bias which often pervades such stories. It will just annoy me, and I would rather not be aggravated in a book I want to read for pleasure. Honestly, if all Brits were supposed to be as straight laced, spoiled and soft as Eleanor one wonders how they ever managed to colonize the Americas in the first place.

Sadly, this book also followed the stereotype mentioned above. Basically, every member of the British armed forces, and the institutions of the army and navy as a whole were vilified as evil, brutal, corrupt bloodthirsty oppressors. No nuance, or admission that there are bad eggs in every basket, but most soldiers and sailors were just ordinary people. Nope, everyone who wears a Red Coat must be the Devil Incarnate, or a minion thereof.

...and of course, whilst Samuel has a natural air of authority, which entitles him to respect, and is a positive aspect of his character, all British aristocrats are characterized as arrogant, stuffy or lecherous.

So, I fear that, whilst this story was enjoyable, its only served to re-enforce my distaste for stories set in this period.

I requested a PDF of this title from Netgalley with the intention of reading and reviewing. I was not required to write a positive review and all opinions expressed are my own.