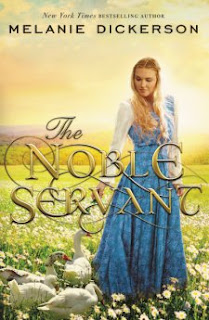 She lost everything to the scheme of an evil servant.
But she might just gain what she’s always wanted . . . if she makes it in time.

The impossible was happening. She, Magdalen of Mallin, was to marry the Duke of Wolfberg. Magdalen had dreamed about receiving a proposal ever since she met the duke two years ago. Such a marriage was the only way she could save her people from starvation. But why would a handsome, wealthy duke want to marry her, a poor baron’s daughter? It seemed too good to be true.

On the journey to Wolfberg Castle, Magdalen’s servant forces her to trade places and become her servant, threatening not only Magdalen’s life, but the lives of those she holds dear. Stripped of her identity and title in Wolfberg, where no one knows her, Magdalen is sentenced to tend geese while she watches her former handmaiden gain all Magdalen had ever dreamed of.

When a handsome shepherd befriends her, Magdalen begins to suspect he carries secrets of his own. Together, Magdalen and the shepherd uncover a sinister plot against Wolfberg and the duke. But with no resources, will they be able to find the answers, the hiding places, and the forces they need in time to save both Mallin and Wolfberg?

I did not, truly know what to expect from this book, especially since I’m not familiar with the fairy-tale it was based on. I have seen from the reviews that it has received a somewhat mixed reception, and in some ways, I can understand why.

It was a sweet story, with some which made some good use of historical details, I liked the parts about education and literacy, which defy some common misconceptions about the period: Medieval people did read the Bible. I also liked seeing the character of Magdelen again, who I liked from the last book in the trilogy ‘The Beautiful Pretender’. In a way though, I think that book was better. It’s like too much effort was put into making her a well-rounded and flawed character, and the shortcomings were inserted in to make her seem less perfect. Steffan started out as interesting, and I did like him throughout the novel, but his actions as responses did not always come across as authentic for a 21-year-old man of his background and period.

The whole style of this one just came over as too simplistic. Like it was written for teenagers, when its marketed at adults. Yes, there was plenty of adventure, but maybe that’s not enough to satisfy an adult audience. The writing was very much telling instead of showing, and very repetitive in places (continually saying that X will happen because of Y, and repeating feeling and emotions).

The villain was almost cartoonish: as such his actions seemed predictable yet unintelligent and badly thought out and the usual condemnation of arranged marriage/marriages of convenience as evil, immoral, and a source of inevitable misery got on my nerves. Tell that to Edward I of England, Edward III, Henry VII, Richard II and all the other Kings of England who had happy and long-lasting arranged marriages, or to William Marshall, Earl of Pembroke, who was happily married for many years, despite his wife being 30 years his junior. Sometimes, there really does have to be more to a marriage then insta-love, and some people did make the best of things.

Finally, a real negative point for me, (and I apologise if this seems pedantic), was the mention of potatoes in 14th century Germany in what is now the author's 10th novel set in Medieval Europe.
It clearly was not just a mistake or oversight: the context was characters eating filled rolls with potato in them, and their presence was mentioned 3 times in a paragraph, along with how much the characters liked them. Potatoes are from the Americas, and were not introduced to Europe until at least the 16th century.

To me this detail, along with some of the observations above, suggest perhaps a hint of carelessness in some of this author’s recent works, or transitioning to a more mature writing style for an older audience, I don't know.
I will certainly keep reading her works in future, and this one was worth keeping as an addition to the series, but it was a little disappointing. I would recommend for younger readers, but for adults who has just discovered this author, I think some of her earlier books would be a better starting point.

I requested a copy of this book from the Publisher for review, and purchased the audiobook of my own volition. I was not required to write a positive one and all opinions expressed are my own.