New Release: A Stranger at Fellsworth by Sarah E. Ladd 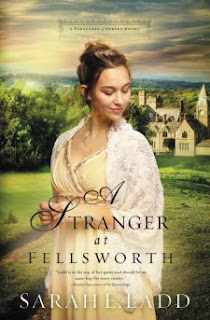 Could losing everything be the best thing to happen to Annabelle Thorley?

In the fallout of her deceased father’s financial ruin, Annabelle’s prospects are looking bleak. Her fiancé has called off their betrothal, and now she remains at the mercy of her controlling and often cruel brother. Annabelle soon faces the fact that her only hope for a better life is to do the unthinkable and run away to Fellsworth, the home of her long-estranged aunt and uncle, where a teaching position awaits her. Working for a wage for the first time in her life forces Annabelle to adapt to often unpleasant situations as friendships and roles she’s taken for granted are called into question.

Owen Locke is unswerving in his commitments. As a widower and father, he is fiercely protective of his only daughter. As an industrious gamekeeper, he is intent on keeping poachers at bay even though his ambition has always been to eventually purchase land that he can call his own. When a chance encounter introduces him to the lovely Annabelle Thorley, his steady life is shaken. For the first time since his wife’s tragic death, Owen begins to dream of a second chance at love.

As Owen and Annabelle grow closer, ominous forces threaten the peace they thought they’d found. Poachers, mysterious strangers, and murderers converge at Fellsworth, forcing Annabelle and Owen to a test of fortitude and bravery to stop the shadow of the past from ruining their hopes for the future.

The third and final instalment in Sarah Ladd’s Treasures of Surrey series was a fun and enjoyable read. It some ways, it reminded me of some of her previous books, particularly The Headmistress of Rosemere (because it involves a girl’s boarding school) and A Lady at Willowgrove Hall (which also involved the protagonist running away).

The characters were interesting, I especially liked the hero Owen Locke, who I think cropped up in the last book somewhere. A gamekeeper and single father afraid of loving again after a tragedy, who is nonetheless a man of honour, and Annabelle’s Aunt and Uncle. The caring if slightly eccentric headmaster and his wife. The love story was well written without being too mushy, as were the faith elements. They came across as natural to the story, conveyed in the lives and experiences of the characters, and not too preachy but appropriate for the time.

The synopsis however, I think exaggerates the element of danger, mystery and intrigue. Something does happen, there is mention of a gang of poachers in the local forest, but it’s not as central to the story as Annabel and Owen’s relationship except at the end, where it serves as a foil. I think another reviewer mentioned that whilst this is a good story, it’s not especially memorable, nor as atmospheric as the last book, which featured some wonderful evocative descriptions of the landscape and setting.
I also agree that the antagonists weren’t as well written as other characters. They were rather predictable and some of thier actions seemed a little far fetched.

A few Americanisms in the story were also a source of some annoyance. I’m not sure school attendees were called students in 19th century Britain. Wouldn’t it have been pupils? A girl being bullied saying the other children were being ‘mean’ to her for not being ‘smart’ just doesn’t sound right. It’s not in the same league as Jane Eyre- can modern fiction ever be? This novel is however a great choice for those seeking a light, clean read that isn’t too taxing and was a good conclusion to the series.

I requested an ebook version of this title from the Publisher for review, and purchased the audiobook of my own volition. I was not required to write a positive one an all opinions expressed are my own.