High as the Heavens by Kate Breslin: New Release 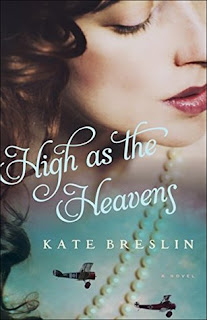 In 1917, Evelyn Marche is just one of many women who has been widowed by the war. A British nurse trapped in German-occupied Brussels, she spends her days working at a hospital and her nights as a waitress in her aunt and uncle's café. Eve also has a carefully guarded secret keeping her in constant danger: She's a spy working for a Belgian resistance group in league with the British Secret Service.

When a British plane crashes in Brussels Park, Eve is the first to reach the downed plane and is shocked to discover she recognizes the badly injured pilot. British RFC Captain Simon Forrester is now a prisoner of war, and Eve knows he could be shot as a spy at any time. She risks her own life to hide him from the Germans, but as the danger mounts and the secrets between them grow, their chance of survival looks grim. And even if they do make it out alive, the truth of what lies between them may be more than any love can overcome


I read Kate Breslin’s last book set during the First World War Not by Sight, and though it was good on some level I just wasn’t keen on it. I think this latest one was a considerable improvement, with stronger characters and just a better plot. The other one was about spying, and this one about espionage and an Underground resistance movement, but it was just more credible and not so predictable. I didn’t guess who the double agent was at all, which is always a good thing.

It was also great that this was a non-traditional Romance, with flawed but sympathetic characters who had a genuine connection and motive behind their actions. I also liked the way this novel ‘wore’ the historical details well. They didn’t overtake the story on the one side or seem contrived on the other. Rather, it evoked the period and world in which the characters were operating, a harsh and war-torn one which changed people forever. The world in which they had to bend the normal rules to survive. In that context, it would be easy to vilify all Germans, but I appreciated the more nuanced depiction of some of them

My only complaints were that towards the Middle it did drag a bit, and some parts became a little repetitive, with Eve constantly going over something that had happened to her before and its impact. I don’t feel the reader needs to be constantly reminded of event manner mentioned above, they’ll usually get it quite quickly. The characterization and climax were strong enough to make up for that, however. Except for one part, which although typical in Christian Fiction might come over as a little corny and contrived to those who are not used to the genre.
Also, there were the inevitable Americanisms used by the supposedly Belgian and British characters ‘closet’ (Brits would say cupboard), ‘apartment’ instead of flat, ‘fall’ instead of Autumn, and Eve talking about what she wanted to do after ‘College’, which is what Brits call University. This did make some passages rather jarring, and one towards the beginning annoyingly vague, where the characters referred to ‘Oxford High School’ and Eve training as a nurse at ‘The London Hospital. Yeah, which London Hospital? I mean, there are quite a lot of Hospitals in London, and there are a lot of girl’s schools in Oxford. The names were so obviously made up, which was a shame when other such details were much more precise. I don’t feel there were as many Americanisms as there were in the author’s last book, and the attention to detail was greater, but there was still some room for improvement.

Overall though, this was a wonderful book, full of excitement, action, and high emotion (it even jerked a tear from me a couple of times) but interwoven with a satisfying message about finding grace and peace.

I requested an e-book edition of this title for review and purchased the audiobook of my own volition. I was not required to write a positive review, and all opinions expressed are my own.