The Mark of the King by Jocelyn Green 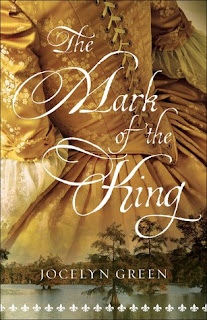 After being imprisoned and branded for the death of her client, twenty-five-year-old midwife Julianne Chevalier trades her life sentence for exile to the fledgling 1720s French colony of Louisiana, where she hopes to be reunited with her brother, serving there as a soldier. To make the journey, though, women must be married, and Julianne is forced to wed a fellow convict.

When they arrive in New Orleans, there is no news of Benjamin, Julianne's brother, and searching for answers proves dangerous. What is behind the mystery, and does military officer Marc-Paul Girard know more than he is letting on?

With her dreams of a new life shattered, Julianne must find her way in this dangerous, rugged land, despite never being able to escape the king's mark on her shoulder that brands her a criminal beyond redemption

I read very little fiction set in America during the Colonial period, as I don’t really relate to the period or the setting, and I’m not familiar with the history. My decision to read this book was based largely on positive endorsements and recommendations from friends on social media, and generally, it didn’t disappoint.

The story was good and made good use of the historical details about some little-known events. The main characters were realistic and developed although some of the villains were a little like caricatures. I did the like the way the author described environment and region. For someone who’s never been to New Orleans or near the Gulf of Mexico that was helpful. I loved the hero Marc-Paul's faithful little pug, and I think I warmed to him more than Julianne’s husband Simon earlier in the book, whom I found smugly arrogant.

There were a few things I didn’t quite agree with. I understand this novel is meant to be about Grace overcoming injustice, legalism, and hatred, but I don’t think this message was always delivered accurately. For instance, when the hero, a commander in the colony started questioning his strict adherence to the law, the passages that were cited related to the Old Testament Torah, not the legal codes of modern European states.
Grace does not equal anarchy or licensed lawlessness, as there are just as many passages in the Bible that talk about being subject to rulers and the Law of the Land. As such, I think it’s necessary to strike a balance in Fiction.

Some incidents and details also didn’t ring true. How on earth did the hero know that the villain tried to rape his wife when he wasn’t there at the time, and none of the witnesses were present? He didn’t tell him, and she didn’t mention it from what I can recall. I also agree that some scenes did strike me as a little too melodramatic. I understand that a load of people transplanted to the wilds of Louisiana, struggling to eke out a living were going to be on the rough side, but a heavily pregnant woman being publicly flogged, to the point that it causes a miscarriage? Really? In England, even in the pre-modern period, pregnant women were usually spared the worst penalties, including capital punishment.

The ending, whilst it lined up with natural phenomena and events common to the region, did fall a little on the side of far-fetched, but it kept me reading, and the story was pretty solid and well-written overall. Although I got a copy from Netgalley, this title went on sale on Kindle a few months later, and I purchased it. I would certainly keep it on there to read again when I’m in the mood.

I requested a copy of this title to read and review. I was not required to write a positive one and all opinions expressed are my own