A Secret Courage by Tricia Goyer 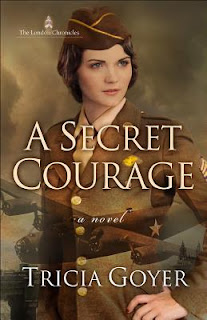 A Mystery Brought Them Together. Will Secrets Destroy Their Love?

Dive into WWII history in this well-researched story of international intrigue, heartwarming romance, and profound courage.

American Emma Hanson is one of a dozen women sent to work in London as a cryptographer—decoding German secrets at the height of World War II. Her job as a member of the Women's Army Corps gives her a way to fight back against those who killed her brother. The only distraction she needs is a good book for the long nights of bombing that threaten her fragile peace.

Englishman William Brandt's mind is full of the secrets he knows and the spies he must keep tabs on to ensure the safety of the people and nation he loves. But there might just be room in his heart for a pretty WAC worker with a sweet spirit—and a curiosity that could threaten all his plans.

Emma's and William's paths cross in the aisle of a London bookstore as they reach for the same Agatha Christie novel. But such an innocent beginning could have deadly consequences...


Although Tricia Goyer is the author of over 200 books, this was the first one of hers that I have read. Many of the others are Amish or American fiction, which doesn’t really appeal to me. This was also my first Christian novel set during the Second World War. Typically, I don’t tend to choose books set at the time, because I’m not very familiar with the period, and because a lot don’t really mention the British contribution to the war, normally just focusing on the American war effort, and American military personnel.

It must be said the premise and storyline of this book was great. It focused on a virtually unknown group whose job involved interpreting aerial reconnaissance photos. They played a major and vital role in certain aspects of the war, such as gathering intelligence on the Nazis secret weapon- which turned out to be the V2 rocket and its launch sites. Though I’m not entirely certain how successful that operation was, as many V2s fell on London and other areas in the last two years of the war.
Emma and her fellow WAF ladies were interesting and well-drawn characters, and Will was also intriguing, especially with the clever twist about him possibly being a double agent. National sympathies and motivations were also presented accurately in the story so that those wondering why Americans volunteered to fight in Europe might grow to understand their choice a little more.
My only complaints are the same as those raised by other reviewers- there were a lot of mistakes in terms of the language and other details, with British characters using quite conspicuous Americanisms.

Among them ‘sidewalk’ which British people still call ‘pavement’, and ‘kids’- although the term is common today, in the 1930s it would have been extremely unusual for a British person to be heard calling a child that. At another point Will mentioned ‘majoring in history at college’, - we would stay read or studied history at University, and finally Emma talked about her British mother taking cream in her tea. I don’t know any Brit who puts cream in tea, it’s disgusting. Milk is for tea, cream is for coffee, but there seems to be a lot of confusion over this in fiction.

Also, I did find the story a little confusing and unrealistic in some places (such as the opening sequence) perhaps that was because it was meant to be complicated, and it dragged a little here and there. I doubt there are many stories which don’t do this. Overall, I did enjoy the book and found the setting fascinating. It must, I suppose be rather difficult for an author of American Fiction to turn their hand to British fiction for the first time, and not all do it well. Mrs. Goyer has, but a little more research on the finer details might have made it even better.
I’m looking forward to the next installment, which I understand revolves around the Kinder transports. I just hope that the role of Nicholas Winton and other British men and women involved in that heroic effort to rescue Jewish children is not overshadowed by the novel’s American protagonists.

I requested a PDF of this book from Harvest House via Netgalley to read and review. I was not required to write a positive review and all opinions expressed are my own.