I've joined up to the First Line Fridays group and today is my first contribution, worthy of note at least.
For those unfamiliar, it involves sharing the first line of the book that we are currently reading, alongside a picture and synopsis. Just a fun way of sharing our love of books with our friend in the blogosphere.

So, for my first contribution, I am sharing my current read by a British author, journalist, and archaeologist. It's the last in a trilogy of novels set in seventh-century Britain surrounding the lives and reigns of three early Anglo-Saxon Kings who converted to Christianity.  Through their patronage, Christianity came to be established in the Kingdoms that formed what is now England. 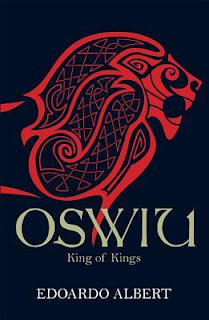 Although it all sounds very dry, I've loved pretty much every minute so far. The seventh century was a fascinating period, on the edge of recorded history in which myth and fact merge, pagans and Christians co-existed, and historical rulers entered the realm of legend. A world of heroic and notorious warlords, priests, and Saints in which some people could be all at once. Saxons, Britons, Scots, Picts and Irish all inhabited the Isle of Britannia, often vying for power on the battlefield and in the halls and Kings.

"The column of riders rode through the water meadows that spread out from the broad river."

Click the links to see more on the book and the other titles in the series.

Want to join in the book fun? Visit the other members to look at their books, and if you want, comment with the first line of your own current read.