First Line Fridays #14: A Hobbit, A Wardrobe and A Great War

So I was planning to do another book, but then I saw the note about Veterans Day (or Remembrance day, as its called in the UK), which is of course tomorrow. Finding a book is a struggle, as I don't read a lot of stuff set during the World Wars. A couple of novels this year, and I have been approved for one releasing in January.

I just don't fancy doing one of them: something set during another war in the far distant past? In the end, I've chosen to use a non-fiction title I listened to on Audiobook a few months back about the experiences of the famous authors J.R.R Tolkien and C.S.Lewis in the First World War, and its impact on their lives and writings.

Although I disagree with the subtitle of the book and some of the claims made in it .C.S.Lewis if anything, I supposed to have lost his faith during the War, far from having it strengthened, and the two men did not even meet until 1928.
Yet, Joseph Loconte does a good job making the subject matter interesting: and bringing to light some interesting passages in the Chronicles of Narnia and Lord of the Rings which reflect the experiences of the authors in that terrible conflict.  Its even believed that Tolkien penned some of his early work set in Middle Earth during the conflict. 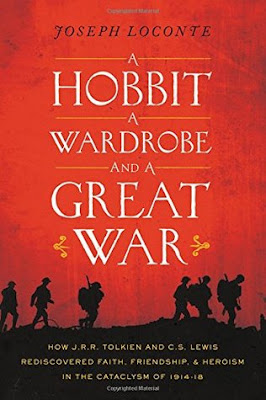 My passage today does not come from the actual first line, but from part of the introduction to the book.

"Both authors have been accused of escapism. Their choice of literary genre, the romantic myth, was by some estimations "essentially an attempt to liberate themselves from the ugliness and moral impasse of the modern world". Yet neither Tolkien nor Lewis took their cues from works extolling escapist fantasies or the glorification of war".

Readers, I hope will also forgive me for including a meme with another quote, appropriate to the commemorations, spoken by the character of Faramir, Captain of Gondor in the Lord of the Rings; The Two Towers. 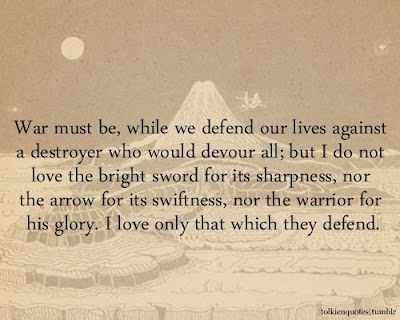 Join me again next week, and click the meme below to see what books other members are including this week.