The Hour Before Dawn by Penelope Wilcock 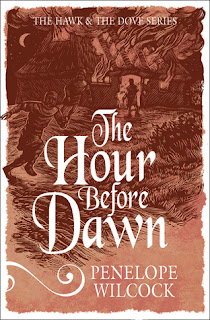 Once again, author Penelope Wilcock reaches back through the centuries to the ancient monastery of St. Alcuin. Abbot John is undergoing deep, emotional shock after learning of the rape of his sister and murder of his mother; Father William is discovering his own vulnerability; and there, immersed in the daily routine of simple tasks, the brothers undertake the greatest task of nurturing the grace of God in their souls.

Book 5 in the recently continued The Hawk and the Dove series, The Hour before Dawn explores the psychological impact of grief and trauma as well as how one can be healed. Wilcock deftly weaves themes of the resurrection and ascension throughout the story, exploring the process of having survived suffering, but not yet having moved on. Characters eagerly await the coming dawn of restoration. Based on solid historical research, Wilcock’s representation of monastic life is authentic, rich with poetic prose and a sense of time and place.

This is another one of those books that I am in two minds about. I knew from before I read it that is was very controversial because of the subject matter and some of the content. Basically, it begins with an account of an attack by a group of drunken village men on the mother and sister of Brother John, Abbot of the fictional St Alcuin’s monastery in Yorkshire. The attack culminates in the women’s house being burned down, Madelaine’s John’s mother is accidentally killed and his sister very deliberately raped.

I do understand where the author was coming from with including these scenes, I really do. It resulted from a desire to explore the impact of emotional trauma as well as the struggle of Christians to reconcile their faith with the bad things that happen in the world, and to other Christians. I am not one of those people who think we should shy away from exploring difficult or painful subjects in Christian Fiction. In fact, I find such content less objectionable when it has a serious purpose then when it simply used to create drama.

However, I do object to the context in which the scenes in question was presented. It was made out that the villagers attacked Madelaine and her daughter because they were suspected of being ‘witches’ for being able to read, and knowing about herbalism. Later in the story, when a distraught John was considering pursuing legal action, it was claimed that this would only cause more trouble because a Sheriff would probably also suspect such a woman of being a witch.
Sorry, but I consider such claims to be patent nonsense, which only serves to perpetuate myths about history. There is plenty of evidence that Medieval women could read, and plenty of evidence that they owned books, including religious books and missals. Some women even wrote or translated religious books and were never suspected of ‘witchcraft’ for doing so. It was entirely acceptable for women to be literate, and herbalism was a commonly known and widely accepted practice for both sexes.

I almost think that in some places, a false or misguided basis was being created from which to condemn supposedly sexist and misogynist attitudes which may not have even existed in the first place, or at least not have been so pervasive as was claimed. Finally, I was a little concerned about one scene in the monastery in which a monk referred to the spiritual resurrection of Christ. Church doctrine for much of the last 2000 years has held to a physical resurrection: only Gnostics believed it was spiritual.

Once I got past certain passages, I did find this book more enjoyable and I will certainly try to finish the series, but this installment is not for the fainthearted or easily offended. Sadly, also, on a historical level, the points detailed above prevent me from giving it a higher rating.

I was sent a paperback copy of this title from the publisher Lion Fiction upon my request. I was not required to write a positive review and all opinions expressed are my own.