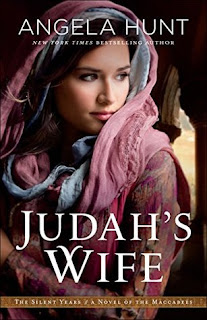 
Seeking peace and safety after a hard childhood, Leah marries Judah, a strong and gentle man, and for the first time in her life Leah believes she can rest easily. But the land is ruled by Antiochus IV, descended from one of Alexander the Great's generals, and when he issues a decree that all Jews are to conform to Syrian laws upon pain of death, devout Jews risk everything to follow the law of Moses.

Judah's father resists the decree, igniting a war that will cost him his life. But before dying, he commands his son to pick up his sword and continue the fight--or bear responsibility for the obliteration of the land of Judah. Leah, who wants nothing but peace, struggles with her husband's decision--what kind of God would destroy the peace she has sought for so long?

The miraculous story of the courageous Maccabees is told through the eyes of Judah's wife, who learns that love requires courage . . . and sacrifice.

This second novel set in what Christians generally refer to as the Inter-testamental period was interesting. The events of this book are recounted in 1 and 2 Maccabees, two books which are part of Old Testament Apocrypha. Writings which have been sadly ignored by many modern Western evangelicals. I know something about the Maccabees before reading this, novel, but not a lot.

The story is told from the perspective of Judah Maccabeus, the most famous of five sons, and his fictional wife Leah. It starts out as a traditional romance, with Leah seeing her arranged marriage as a way to escape her abusive father, but then struggling to find her place in her husband's family.
The situation then becomes more difficult when observant Jews like the Maccabees find themselves on the wrong side of the law, as the authorities try to force them to worship pagan gods. From about halfway through, there are a lot of battle scenes, and details recounting military campaigns so that the romance takes the back foot. I personally don't mind that, because I prefer straight out historical fiction with some romantic elements to fluffy romance, with some superficial 'history bits' thrown in.

However, in some places, the plot fell back to one of the usual tropes of the Romance genre: with misunderstanding keeping the characters from developing their relationship.
In this case, the 'misunderstanding' was that Leah believed that because her husband fought to defend their people, he would also become violent towards her like her father had been.
Thus, Leah started acting like a total brat and using emotional blackmail to try to force her husband to change and do what she wanted or provoke him into divorcing her.

Personally, I found that made it harder to sympathize with her when Judah had given no indication of having a violent nature and had never harmed her after years of marriage. Yet she still suspected that he would suddenly turn because of what happened in her childhood. As usual, the whole problem was resolved by talking (why couldn't they have done that earlier?), and prayer: which is not a problem, but is pretty typical in religious fiction.

The other thing which annoyed me was the Americanisms. I understand that publishers want to make books accessible to American audiences, but I think a woman living in a small Judean town over 2000 years ago talking about traveling several 'blocks' was almost too much.

After the resolution, Leah developed more to become less annoying, and the story improved. So it was a decent read overall which breaks from the typical HEA ending. Recommended for lovers of historical fiction which is lighter on the Romance side.

I requested an ARC from the Publisher via NetGalley and listened to the audiobook which I purchased of my own volition. I was not required to write a positive one, and all opinions expressed are my own.