The Lost Castle by Kristy Cambron 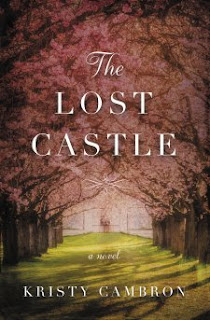 Ellie Carver arrives at her grandmother’s bedside expecting to find her silently slipping away. Instead, the beloved woman begins speaking. Of a secret past and castle ruins forgotten by time. Of a hidden chapel that served as a rendezvous for the French Resistance in World War II. Of lost love and deep regret . . .

Each piece that unlocks the story seems to unlock part of Ellie too—where she came from and who she is becoming. But her grandmother is quickly disappearing into the shadows of Alzheimer’s and Ellie must act fast if she wants to uncover the truth of her family’s history. Drawn by the mystery surrounding The Sleeping Beauty—a castle so named for Charles Perrault’s beloved fairy tale—Ellie embarks on a journey to France’s Loire Valley in hopes that she can unearth its secrets before time silences them forever.

Bridging the past to the present in three time periods—the French Revolution, World War II, and present day—The Lost Castle is a story of loves won and lost, of battles waged in the hearts of men, and of an enchanted castle that stood witness to it all, inspiring a legacy of faith through the generations.

A timeslip novel that features three consecutive time periods is- ambitious to say the least. Some people mentioned that they found the triple plot lines confusing and hard to follow. That wasn’t really an issue with me, perhaps because this wasn’t my first timeslip novel. Although, when the characters in one time and place started remembering something that had happened a few years or months before, it could get a bit much, since it effectively made three different places in time to five.

I thought the three stories were well told and worked well together in the end. I have some experience with Alzheimer’s, so could identify with Ellie’s fear of ‘losing’ her grandmother to the disease, and her desire to find out about her past before it was too late. I also liked the way that the castle itself was used as a character, in some sense: the brooding and mysterious building that was always close by, but hidden and inaccessible at the same time. I think though that whilst I liked most of the characters, I never warmed to Aveline: the seventeenth-century woman. Whilst it was possible to feel sorry for her at first, she came over as arrogant and dogmatic in the end.

There were two things that I really did not like about this novel though, in hindsight (nearly a week after finishing it). First off, the British and Irish character used a lot of Americanisms, which is common in books like this. In this instance, it wasn’t just jarring: it also didn’t ‘sound’ right.  Characters from 1940s England speaking an odd combination of British and American English just didn’t work for me.

Secondly, I really did not agree with or like what felt like a sympathetic portrayal of the French Revolution. I understand some Americans think it was a good thing, but to do that, it’s necessary to ignore the terrible violence that took place during the Reign of Terror, when thousands of innocent people including women, clerics, and commoners were murdered.
I understand the events depicted in parts of the story set during the Revolution took place a couple of years before that, and they appealed to Aveline’s sense of justice, but I still didn’t like her attitude, and her and her rescuers’ naïve belief that all would be good and rosy for them as long a love and justice prevailed.


In spite of these complaints, though, I did enjoy this story overall, and I would consider reading some of the author's previous works.

I requested the eBook of this title from the publisher via Booklook Bloggers and purchased the audiobook of my own volition. I was not required to write a positive review and all opinions expressed are my own.