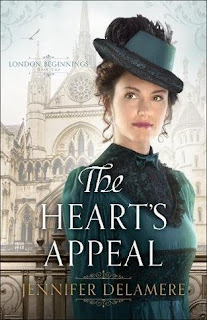 Strong-minded and independent Julia Bernay comes to London to study medicine and become a doctor--a profession that has only just opened up to women. She witnesses a serious accident, and through her quick actions saves the life of an ambitious young barrister named Michael Stephenson.

Coming from a family that long ago lost its money and its respectability, Michael Stephenson has achieved what many would have thought was impossible. Hard work and an aptitude for the law have enabled him to rise above his family's stigma and set him on the path to wealth and recognition. But his well-laid plans are upended when the accident brings Julia into his life.

Michael soon discovers he's met a woman every bit as stubborn and determined to make her mark on the world as he is. Sparks fly--but will they find common ground?

Thanks to the recent release of the audiobook, I got through this title in two days, but sadly there is no listing for the audiobook, so I had to use this one. I did get approved for this title on NetGalley, so I guess I have that excuse.

I think I enjoyed this book better than the last one, which I felt was rather far-fetched at the beginning. The story was interesting, and a lot of the details were interesting and well-drawn, especially about the geographical region where the story was set. Some of the details about the early days of women in the medical profession and their struggles to be accepted were fascinating. Of course, I liked the parts about Julia's Latin lessons too, as a Latin student myself, although this was a minor aspect of the story.

The romance was well done without being overwhelming or mushy for the most part (except a couple of scenes): and some of the relationships between secondary characters such as Michael's sister and brother-in-law provided more depth.

So why the lower rating? Two reasons. One was that I found Julia rather interfering. I understand that she wanted to be a missionary and help people, but her actions were not always related to that. At times, she seemed like she was trying to 'fix' everyone else's life and problems. That might work out in Fiction, but it doesn't always do so in real life.

Second: the Americanisms. In some parts of the story, there seemed to be a concerted effort to avoid American terms and phrases, but the lapses stood out. A Londoner talking about police officers on every 'block', which is not and has never been a unit for measuring distance in Britain, was one example. In other places, they used terms like 'gotten' and 'candy'.
I don't know whether the use of certain American terms was a result of deliberate editing choices to make the story more understandable for American readers or not, but I find them jarring.

All opinions expressed in this review are my own. I was not influenced by the Publisher and was not required to write a positive one.