First Line Fridays 23: Across the Blue by Carrie Turansky

That time of the week again! Britain has welcomed in March with heavy snowfall and even blizzards and temperatures below freezing.  Where I am, the snow that fell last night has frozen. So it's more like bleak midwinter than the opening of spring. So, it's staying inside today, working from home and hopefully doing some reading.

I'm including the book that I am currently reading for the Celebrate Lit Blog Tour, which I am due to post for on Wednesday. Across the Blue is Carrie Turansky's latest Georgian Historical novel, the title is a reference to the English efforts to make the first aeroplane flight across the English Channel in the early 20th century.

I know some other members have included this book in previous weeks, so no more introduction is really needed.

Isabella Grayson, the eldest daughter of a wealthy, English newspaper magnate, longs to become a journalist, but her parents don't approve. They want her to marry well and help them gain a higher standing in society. After she writes an anonymous letter to the editor that impresses her father, her parents reluctantly agree she can write a series of articles about aviation and the race to fly across the English Channel, but only if she promises to accept a marriage proposal within the year. When James Drake, an aspiring aviator, crashes his flying machine at the Grayson's new estate, Bella is intrigued.

James is determined to be the first to fly across the Channel and win the prize Mr. Grayson's newspaper is offering. He hopes it will help him secure a government contract to build airplanes and redeem a terrible family secret. James wants to win Bella's heart, but his background and lack of social standing make it unlikely her parents would approve. If he fails to achieve his dream, how will he win the love and respect he is seeking? Will Bella's faith and support help him find the strength and courage he needs when unexpected events turn their world upside down? 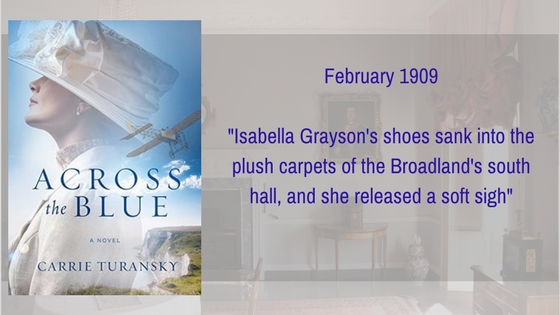 Now you can comment with the first line of the book you are reading, and visit the link to see what the others in the group are doing. Happy Friday and Happy reading!