Is it already Friday again? The weeks are flying by: and the first day of June this year. There are 4 birthdays in my family this month, and father's day in the UK falls in June as well. Its going to be so busy.

Today, I am including another book that I have had on my Kindle Cloud reader for years, as I am attempting to clear my Kindle backlog. I did not buy it directly from Amazon, but from the Publisher's website, because Amazon UK's price was extortionate.
Although its fantasy, Dawnsinger by Janalyn Voigt is supposed to be inspired by 13th century English history. 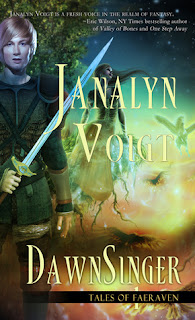 The High Queen is dying... At the royal summons, Shae mounts a wingabeast and soars through the air to the high hold of Faeraven, where all is not as it seems. Visions warn her of danger, and a dark soul touches hers in the night. When she encounters an attractive but disturbing musician, her wayward heart awakens. But then there is Kai, a guardian of Faeraven and of Shae.

Secrets bind him to her, and her safety lies at the center of every decision he makes. On a desperate journey fraught with peril and the unknown, they battle warlike garns, waevens, ferocious raptors, and the wraiths of their own regrets. Yet, they must endure the campaign long enough to release the DawnKing and the salvation he offers to a divided land. To prevail, each must learn that sometimes victory comes only through surrender.

"The crosswind caught Kai's wingabeast as lightning flared too near. Shrilling, the winged horse tilted in flight, and Kai's stomach lurched'.

I may not be posting much this month, or my postings may be late, because I have a lot of commitments coming up.

As usual though, you can comment with your own First Line, and click the meme below to see what other members of the group are reading.