A Most Noble Heir by Susan Anne Mason- Review 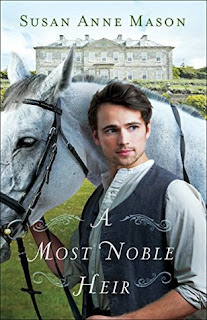 When stable hand Nolan Price learns from his dying mother that he is actually the son of the Earl of Stainsby, his plans for a future with kitchen maid Hannah Burnham are shattered. Once he is officially acknowledged as the earl's heir, Nolan will be forbidden to marry beneath his station.

Unwilling to give up the girl he loves, he devises a plan to elope--believing that once their marriage is sanctioned by God, Lord Stainsby will be forced to accept their union. However, as Nolan struggles to learn the ways of the aristocracy, he finds himself caught between pleasing Hannah and living up to his father's demanding expectations.

At every turn, forces work to keep the couple apart, and a solution to remain together seems further and further away. With Nolan's new life pulling him irrevocably away from the woman he loves, it seems only a miracle will bring them back together.

Well, this book was something of a rollercoaster. Not an emotional rollercoaster, it’s not one of those novels which relies on non-stop action, drama or peril to play on the emotions of readers. What I mean by a rollercoaster is how my opinion of the book changed. There were points when I was not sure if I’d like it: and when I really did not like the protagonist, Nolan Price: but I was enthralled and very satisfied by the end.

It needs to be stated from the start this this is not a typical Historical Romance because *spoiler alert* the protagonists get married very early on, but circumstances seem determined to keep them apart. Nor is does it fit the mould of a lot of other Victorian Inspirational novels. Some have called it a ‘rags to riches’ story, and I would say at the heart of it is a story about broken families coming together and healing.

What I came to enjoy about it the most was the emotional development of the character, particularly Edward, the Earl of Stainsby, ostensible the ‘villain’ of the piece. Now, I must confess that in some stories I have found myself sympathizing with and even quietly rooting for the villain, especially when he or she does not seem especially villainous or has not done anything too heinous.
I believe I saw Edward, fundamentally, as a man wronged and that was what made him the way he was.
Although I could understand Nolan’s love and loyalty for the women who raised him, I did think her actions were ever adequately explained, and I do think she was partly responsible for the pain that made Edward such an ‘ogre’.
Probably, because of that, I sympathized with him at times more than Nolan, who seemed very single minded in pursuit of his goals and ambitions and not above using emotional blackmail to bring them about.

Perhaps Edward was like that too, but I don’t know, I found myself to be more forgiving of him: and I do like the way he started to change under the influence of the wonderful Duchess Iris. An amazing character, reminiscent of the uncompromisingly blunt Lady Violet from Downton Abbey. All the major characters must face their own weaknesses and shortcomings to make things right though, which provides some good balance.

I had a couple of minor gripes: one of them with the inevitable Americanisms (words like ‘gotten’ which crept in) although I would say there were fewer of them in this novel than in others I have read. Also, some of Nolan’s attitudes seemed conspicuously anachronistic- for example, he deplored hunting and seemed to entirely eschew alcohol.
At one point, when offered a drink of wine he said something about not drinking ‘spirits’- which might be a valid position, but its inaccurate, since wine is not a 'spirit'. 'Spirits' is the word used to refer to alcoholic beverages which are distilled to make them stronger, and wine is not distilled.  Its just fermented.
It’s not the first time I’ve seen alcoholic beverages wrongly referred to as ‘spirits’, and it’s just kinda annoying.

Overall, A Noble Heir was a nice simple story, and a good option for someone looking for something a bit different in the Historical Fiction/British Fiction Genre.

I requested the title from Netgalley, and was not required to write a review, or a positive one. All opinions expressed are my own.