Mark of the Raven by Morgan L. Busse 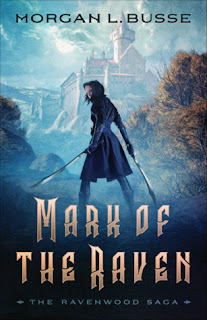 Lady Selene is the heir to the Great House of Ravenwood and the secret family gift of dreamwalking. As a dreamwalker, she can enter a person's dreams and manipulate their greatest fears or desires. For the last hundred years, the Ravenwood women have used their gift of dreaming for hire to gather information or to assassinate.

As she discovers her family's dark secret, Selene is torn between upholding her family's legacy--a legacy that supports her people--or seeking the true reason behind her family's gift.

Her dilemma comes to a head when she is tasked with assassinating the one man who can bring peace to the nations, but who will also bring about the downfall of her own house.

One path holds glory and power, and will solidify her position as Lady of Ravenwood. The other path holds shame and execution. Which will she choose? And is she willing to pay the price for the path chosen?

Mark of the Raven is the first novel in a new fantasy series from author Morgan L. Busse. I believe she has written other books, but this is the first one to be picked up by Bethany House. Overall, I enjoyed it more than I expected it to. The concept was good and well executed and the world building quite believable. I would not all the setting wholly Medieval, as there were modern elements (tea trays etc) but they don’t seem intrusive or anachronistic. They just kind of work as part of the invented world.

There were faint resemblances to other stories including Patrick W Carr’s Darkwater Trilogy which involves different houses or families having different ‘gifts’, and even Game of Thrones with a clan of dragon riders (a wyvern was according to mythology a two-legged dragon) and a house the symbol of a raven. Yet there was enough originality in the story and characters for this story to work on its own. Despite a few clichés- leather trousers for example or characters drinking tea out of iron mugs. Yeah iron a conductor of heat, so, burning hazard there.

Also, the characters were interesting. Again, it’s easy in some fantasy stories for the characters to get ‘lost’ in the complexities of the story or the action, or just be killed off too quickly. It was possible to identify with Selene’s moral struggles and angst about her purpose the destiny in life, her care for her family was tangible, and I was found myself rooting for her throughout.

My only real complaint was that things got a little repetitive in a few places. I think the history of what had happened to House Ravenwood only needed to be mentioned a couple of times, not over and over again. Also, the way that characters kept mulling over their actions, thoughts and feelings, often with the same decisions and conclusions became repetitive.

I certainly recommend this novel to lovers of clean fantasy with an inspirational flavour set in unique and imaginative worlds, and I look forward to the story continuing in the next book.

I requested this title from the publisher via Netgalley. I was not required to write a positive review and all opinions expressed are my own.