A Little While Longer by Venessa Knizley 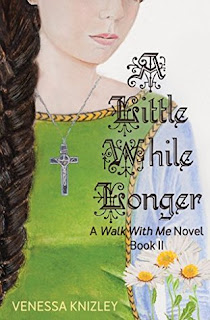 The worst of the Plague has ended, but who among the living can claim to have escaped the effects of its devastation?

Certainly not Lady Velena Abrose, who not only bears the scar of her mother’s death, but also lives with the uncertainty of her brother’s life.

Having remained sheltered for the last three years, Velena now finds herself thrust into a harsh season of change as her self-seeking uncle arrives at the castle with news that his eldest son has died—and with him, her arranged marriage.

Tristan wants to believe that the death of Velena’s betrothed means new-found freedom for their ever-deepening friendship, but in his heart, he knows differently. Plans are already being laid for Velena’s future, and chances are, they won’t include him.

A little while longer, and their friendship may be lost.

To briefly summarise, this series is about a teenage girl, Lady Velena Ambrose, the daughter of a nobleman, whose family and household are caught up in the Black Death which came to England in 1348.

After losing her mother, Velena's father decides to move to one of their remote estates in the country for safety and refuge. Velena mourns for her mother, and suffers terrible trauma and depression. The author captured the existential fear of Medieval people very well: they literally believed the Black Death might be the end of the world and nobody would survive.

Then she befriends Tristan Chaneller, the son of a famous knight, who helps her work through grief and uncertainty, and leads her to faith.
The second story picks up in 1351, after Velena discovered the young man to whom she was betrothed had died, but his brother (who also happens to be her first cousin), is still alive, and a new betrothal might be imminent.

I loved meeting the main characters again. It was great to see the characters grow and develop, in their friendships and relationships with one another: and to see Velena and Tristan deepen their faith in God as well as reaching out to their peers.
There were also the less serious characters, such as Squire Rowan. The banter and hilarious capers of Rowan, Tristan and their company provided some excellent comic relief.

Mostly, I think this novel is about the characters struggle to find their place and purpose. It revolves around Velena's upcoming betrothal to her Cousin, Stuart. She struggles with her feelings for a man she has known all her life but seems much changed, and her friend Tristan who has been at her side for the last 3 years.
She struggles with returning to the home she left before the plague. Most of all she is torn between her duty and sense of what is right, or being swayed by the advice and council given to her by others. Is is just rumour, lies and jealousy, or are they speaking the truth in love?

Whilst the research has been done and historical details in this story are mostly very authentic, I did have a few minor niggles. Firstly, Medieval Bibles like the one Tristan owns were not small, portable books.
They were HUGE. This was the time when most books were made on parchment, and to make a whole Bible would take like a dozen herds of sheep. I mean I've seen the things. One person would struggle to carry one, and they certainly wouldn't fit in a satchel.
That's probably why John Wycliffe only translated the New Testament, and people only had portions of the Bible. So they could make them small and easy to carry.

Second: I'm pretty sure the Catholics I've spoken to say that indulgences were not believed to grant automatic entry into heaven: instead they were believed to provide a remittance of some time in purgatory. I'm not saying I agree with them, or anything, but I think this is a modern misconception they were meant to grant salvation.

I can't want for the 3rd book in the series to continue Velena and Tristan's journeys, and see how things will work out for them and other characters.

It bears mention here that this story does a address what would now be considered adult themes, such as personal relationships, sex within and outside marriage and sexual assault.
It doesn't glorify these things, per se, just mentions them. So, although the protagonists are teenagers, its not really Young Adult Fiction. Older teens could probably read it though.

4 Stars and recommended for all lovers of Historical and Medieval Fiction aged 15 or 16 and upwards.