Far Side of the Sea by Kate Breslin Review 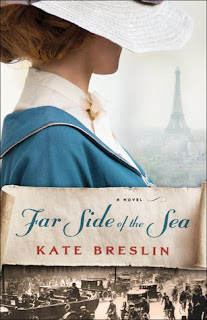 In spring 1918, Lieutenant Colin Mabry, a British soldier working with MI8 after suffering injuries on the front, receives a message by carrier pigeon. It is from Jewel Reyer, the woman he once loved and who saved his life—a woman he believed to be dead. Traveling to France to answer her urgent summons, he desperately hopes this mission will ease his guilt and restore the courage he lost on the battlefield.

Colin is stunned, however, to discover the message came from Jewel's half sister, Johanna. Johanna, who works at a dovecote for French Army Intelligence, found Jewel's diary and believes her sister is alive in the custody of a German agent. With spies everywhere, Colin is skeptical of Johanna, but as they travel across France and Spain, a tentative trust begins to grow between them.

When their pursuit leads them straight into the midst of a treacherous plot, danger and deception turn their search for answers into a battle for their lives


This was a great book overall. It had spying, Intrigue, War, plots and secret codes. Even a very smart messenger pigeon.
The characters were complex and well developed, and all were embroiled in a complex web of familial or country loyalties so at times you could not tell who could be trusted or not. All in the style of a good thriller.

The faith elements were well handled and the romance was sweet, without being overly simplistic or instantaneous. In fact, for much of the book the hero is meant to be in love with another character. So its an unlikely romance.

There were a few things I counted against it though. I think Colin was a little too gullible in certain areas, to fall for the same trick twice. I mean c'mon. He was meant to be an experienced soldier with connections in military intelligence. I expected better of him.

Secondly were the inevitable Americanisms. British people using only a fork to eat in the American manner, and various Americanisms which crept into the narrative. I also feel there were a few things that weren't adequately resolved or developed. I can't quite put my finger on it, it might just be that the ending felt really rushed but I think I preferred the last novel in the series.

It was a good read altogether though, and a good follow up to the author's previous novel Not By Sight which was about Colin's sister. A solid 4 stars.