The Lady of Kingdoms by Suzannah M. Rowntree Review 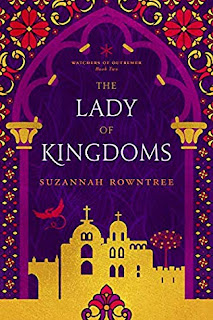 Magic Made Her A Warrior.

Justice Will Make Her A Legend

Jerusalem, 1180: A catastrophe destroyed Marta Bessarion's family and whisked her away from everything she once knew. Now, armed with a magic spear and a burning thirst for justice, Marta vows to protect her new home and family, no matter the cost.

But trouble is brewing in the glittering palaces of Jerusalem...

The young Leper King, Baldwin, is dying. Before he goes, Baldwin must choose a successor...but every choice is a bad one. An innocent child, exploited by stronger men? A crafty cousin who has already tried to snatch the crown? Or his brilliant, passionate sister who is determined to rule - even if it triggers a war?

When enemy armies muster on the kingdom's borders, Marta charges into battle. But when Baldwin's choice puts her newfound family at risk, Marta finds herself fighting a new kind of battle - one in which intrigue, deception, and betrayal are the weapons.

To save the kingdom, she’ll need more than a magic spear to destroy its enemies.

She'll need a saint to save its soul.

The Watchers of Outremer series continues when teenage Marta Bessarion is catapulted through time from the 7th to the late 12th century.

She lands (quite literally) in the Holy Land just before the 3rd Crusade. The rest of the novel takes the reader on an exciting, thrilling- and sometimes breathtaking right through the Crusader states in the 1180s.

The reader will be immersed in the complex politics of the period, and meet some famous historical figures along the way, including Balian d'Ibelin, Baldwin IV 'The Leper King' of Jerusalem, and his flamboyant sister Sybilla. They stand alongside some fascinating Fictional characters, including a love interest for Marta and Persi, a young woman of business who represents the oft forgotten Christian Kingdoms of Medieval Africa.

Of course, there are some stops along the way to take in the culture and customs of the period.
It may come as a surprise for some to learn that 12th century Jerusalem under Crusader rule was prosperous, tolerant and cultured. They rebuilt cities, gardens, churches and places of worship. The depopulated and ruined city Martha knew is replaced with a beautiful metropolis, wealthy and bustling with different cultures.

The events of the period makes for a plot seething with undercurrents of political intrigue and war . Which leads the character into many dangerous and exciting adventures and escapes as the protagonists are are caught up in battles, sieges, and swept up in the time of political intrigue, whilst she struggling to stay determine what is right and just.

The atmosphere of conflict and tension goes deeper with the fantasy elements of a Magic spear said to make the bearer invincible, an evil sorcerer in Saladin's camp and shape-shifting demon using her influence to corrupt some of the most powerful people in the Kingdom. Yet all of these just -work- in the story, which although meticulously researched wears it very well.

I only had a couple of complaints. I related to Marta only in part, and some other characters more. I think part of if was that she came over as a little too perfect, and at times quite naive to what those who ruled had to do to secure the Kingdom.
There also seemed to be an element of fatalism in the idea that only if everything was done in a certain way would the Kingdom be saved. I understand the idea of following the path of righteousness, but at times I felt this was little more than Marta's rigid ideas and her belief that everything would be OK if people just listened to her.
Almost as if as if everything was foreordained, but not allowing for free will or personal choice.
It puts me in mind of what one of the characters says (roughly paraphrasing) that real life is not like the Courtly Romances, "where the virtuous always end up happy and the wicked always die"'.

There were also a couple of places where the story did not feel complete and I wanted to see more of the characters, but that was a deliberate choice to make room for a sequel (or two).
I found some of the action scene a little hard to follow in a couple of places, but this did not detract from the story.
It was well researched and excellently written story, well recommended for lovers of Historical Fiction and Fantasy with strong female leads.
Finally, isn't the cover just gorgeous? The book releases on the 27th of this month. Preorder your copy from all e-book retailers.

I agreed to be an Early Reader for this title and was sent an ARC by the author. This did not influence my review and all opinions expressed are my own.