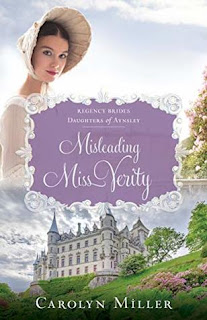 Verity Hatherleigh has a mind of her own—but her actions do not impress her viscount papa. When she gets into one scrape too many, he sends her off to the wilds of Scotland to rethink her headstrong ways.

Anthony Jardine relished his role as curate, but his new duties as laird of Dungally aren’t always to his liking. Though he thought his new inheritance would be a blessing, somehow he’s finding nothing but trouble on these estates. And the intelligent, compassionate, feisty lass who was sent to rusticate in his territory is one of the biggest problems. He’s falling in love with her, but she doesn’t share the faith that’s his foundation—not to mention he’s been lying to her about who he really is. For the truth-loving Verity, that may be unforgivable.

The tangled web these two have woven may spell disaster for their happiness—and for the tenants of Dungally.

I enjoyed this final installment in the 'Regency Brides: Daughters of Aynsley series by Carolyn Miller. It follows Verity, the youngest and arguably the most precocious of the 3 sisters. Verity often clashes with her mother because of her forthright manner and tendency to defy social convention. She lives up to her name, which the Latin for 'truth'.

Most of the story follows Verity's adventures in Scotland, where so goes to visit a school friend with whom she had previously enjoyed many adventures and misadventures. Anthony Jardine arrives back in his homeland only a few weeks before Verity after a sojourn in Australia, where he served as a curate, and meets the intriguing lass (who is staying next door) when she ventures into the grounds of his manor.

Misleading Miss Verity has a lot to offer in terms of witty repartee and the often hilarious capers of the characters, including a sporting event where a character dresses as a man, climbing out a window to attend a masquerade, and even a hint of feuding between rival Scottish clans. Which reminds me that the Scottish countryside features heavily in this story, as well as some people with accents of varying thickness.

Both Verity and Anthony were well drawn characters, but I also liked Helen, Verity's school friend and her large family. Verity's struggle to find love and acceptance provided a realistic edge to the story, making her more human and vulnerable.
Although I didn't agree with all the choices the characters made, or that they were always entirely consistent with their their personalities.

The Romance elements weren't overwhelming in this novel, which is sort of a welcome change, and the reader will be left wanting to find out how everything turns out as it hurtles towards the conclusion. Recommended for Regency readers and lovers of Historical Fiction.

Thanks to Kregel Blog Tours for sending me a copy of this book: I was not required to write a positive review and all opinions expressed are my own.